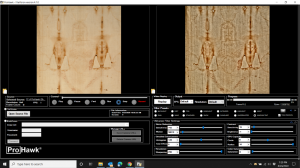 Did ProHawk Technology Groups patented computer vision algorithms in any way contribute to the image analysis details from a sanctioned Shroud of Turin picture?

STERA, Inc. publishers of www.Shroud.com, has been shepherded by Barrie M. Schwortz, Editor, and photographer of some of the most pertinent photographs permitted of the Shroud of Turin. The 14’5” long by 3’7” wide Shroud of Turin is kept in northern Italy at the Royal Chapel of the Cathedral of Turin, typically only revealed a few times per century. Mr. Schwortz has been at the center, and more involved in the hundreds of thousands of hours of thorough study and exhaustive research on the Shroud of Turin than anyone.

ProHawk’s patented industry-leading computer vision restoration algorithms were successful at processing the massive 203MB TIF file of the Shroud Ventral image. The copyrighted Shroud of Turin 203MB TIF image is a whopping 5,829 x 12,177 pixel vertical and horizontal 305 dpi resolution. The uncompressed 24-bit RGB TIF image file provided to ProHawk of the Shroud of Turin is a Ventral Image as it appears in natural light.

“We all hoped that the ProHawk Vision software might reveal something new about the Shroud’s image,” said Barrie Schwortz, Editor of www.shroud.com.“In my initial review of the ProHawk processed images, my personal opinion was that there was really nothing new revealed by the processing…and it was then that I noticed something, it appears to have visualized in a new manner the banding that we already knew existed in the Shroud.”

“In the images processed there were obvious vertical lines running the entire length of the cloth that appeared to coincide with the banding known to exist in the Shroud. Until now, this was best visualized in the transmitted light photographs I made in 1978,” Schwortz continued. “Although the bands are not obvious in Shroud of Turin Ventral image natural light photograph, it appears that the ProHawk software was able to detect and enhance the differences in the weave and make the banding more visible.”

About ProHawk Technology Group, Inc.
ProHawk focuses on creating a better world through higher standards of operation from people and computers. Vision is a critical component for automation, machine learning, and artificial intelligence. In the absence of quality images, we have humans and systems that fail to operate at optimal levels. To achieve superhuman performance, computers and machines require superhuman vision. ProHawk is committed to bringing that vision to all corners of the transformation revolution. ProHawk more than meets the eye.
For more information, visit www.prohawkgroup.com.