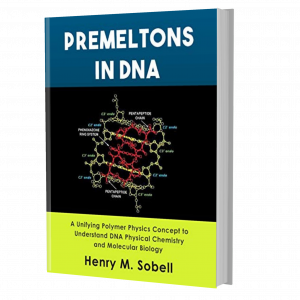 “This paper further explains the structural and physical nature of such regions, along with

the implications they have in understanding DNA physical-chemistry and molecular-biology.”—”

LOS ANGELES, CALIFORNIA, UNITED STATES, June 30, 2022 /EINPresswire.com/ — Author Henry M. Sobell will be one of the featured authors in the upcoming Los Angeles Festival of Books 2022 with his published book titled Premeltons in DNA: A Unifying Polymer Physics Concept to Understand DNA Physical Chemistry and Molecular Biology. It is a research study by scientists working in the area of molecular and cellular biology. It discusses the presence of premeltons in DNA which leads to a unifying theory to understand much of DNA physical chemistry and molecular biology. Predictions of DNA results can implicate physical aspects of the initiation, elongation, and termination of RNA-synthesis during transcription. The author’s contributions to the understanding of how the anticancer agent, actinomycin D, binds to DNA and exerts its mechanisms of action. Thus, the model is now widely accepted to understand the general features of how actinomycin binds to DNA.

“This book is a welcome addition to physicists and biologists interested in understanding the nonlinear dynamical structure of DNA excited at normal thermal energies by the fluctuations that exist at equilibrium. This gives rise to DNA breathing, a phenomenon that involves the transient disruption of hydrogen bonds connecting base pairs that normally stabilize its double-helical structure…Although conceptual, his theory goes on to provide a unified understanding of much of the data in the DNA physical chemistry and molecular biology areas. This is particularly valuable since it makes several experimental predictions – all readily testable.” — Ludmila Vladimirovna Yakushevich, Student of Institute of Cell Biophysics, Russian Academy of Sciences, Amazon Customer Review.