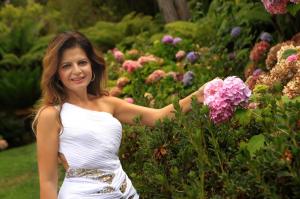 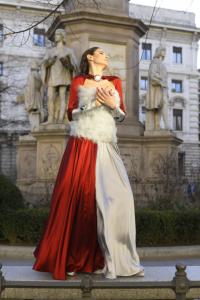 The Red Divided Dress in Milan by Sima Collezione

The creation of the new fashion line, Sima Collezione is an American success story of a young immigrant defying the odds.

The brand’s mission statement is “to bring out the inner beauty of the women who wear Sima Collezione, and to share the story of the brand so that it will empower others to live their dreams.”
— Sima Azadegan

Sima Azadegan began life as an outsider to the West, being born in Tehran, Iran. At just nine years old, she became nearly surrounded by a violent revolution, which later brought the Ayatollah Khomeini to power. She and her family fled to the United States.

Sima arrived in the melting pot of America, yet she was still a refugee, and a member of a tiny minority. She was a young girl without a voice, literally unable to speak a word of English. She was the third child of an immigrant family. As asylum seekers, she and her family were completely uprooted from their language and culture and thrust into a strange new land. Life didn’t seem fair. Discrimination was the norm.

Through tears, heartache, and struggle, Sima battled not only with the normal challenges of growing up female, but also as a young person yearning to be seen as a valuable human being. After countless years of toil, she hoped she could finally have a chance to succeed in a new world where her peers had long before started on that race to ‘be somebody.’ She hoped to finally one day live the American dream, yet everything, including her very start in life seemed against her.

How did a poor immigrant child, the victim of a political tragedy, succeed to become a prosperous Jewish, Beverly Hills housewife, and then one of American women’s greatest new success stories as a rising new global fashion leader? When asked, she will admit, ”through the help of God, through faith, and of course—a lot of dedication and hard work.”

Becoming a board member of four charities she helped lead, raising millions of dollars for them to help children, and even raising three children of her own, she still wanted to do more. From those tenuous early circumstances life handed her, Sima eventually overcame her challenges. She rapidly carved out a rich and full life as a classical pianist, then piano teacher, Beverly Hills housewife, spiritual apprentice, and mother.

Sima spent fifteen years going through what she calls a “journey of inner consciousness,” triggered by the death of a friend, who was only forty-two. “You have to do the hard work on yourself,” Sima explains. “When you tap into who you are authentically, real authenticity, that’s when all the forces of the universe come and help you.”

The Launch of Sima Collezione

One day, during one of her daily meditations, “downloads” from the universe began coming to her as if by magic. Dozens of them came to her. And then hundreds. She began sketching what she saw visions of at a furious pace, ending up with notebooks full of fashion designs. She then trained with a fashion leader in Italy, hired someone from Lady Gaga’s fashion label Haus of Gaga, and the rest is history.

Of the dresses, Sima says, “I refined them with jewels. Like Swarovski jewels and bows and flowers.” The level of detail in Sima’s ornamentation is astounding. The “Green Dress,” for example, has more than 265 3D flower appliques flowing down a light green overlay skirt. Each flower has been designed with a different shade of green Swarovski crystals, to give the dress a feeling of light in motion. The dress, like all her dresses, works like a great painting—with delightful details such as embedded images that one can see up close, and an overall structural form that makes a dramatic impact from a distance. Remarkably already recognized as museum quality masterpieces of art, the dresses from Sima’s current line of one-of-a kind creations go for six figures.

She embarked on a whirlwind international tour of runway shows in September of 2021, starting with Soho, New York. In February of 2022 she did shows at Palazzo Visconti, Milan, and Galerie La Bourbon, Paris. Then in March, she flew off to the Forbes 30/50 Women International Summit, in Abu Dhabi. Press rallied behind her, with a flurry of stories on her landing in Marie Claire, Bazaar, Vogue, and more.

“I stopped asking permission,” Sima states. “I finally found my voice.” Each dress she makes even has its own elegant perfume she has created that goes along with it. And a name. “Each one has a personality,” she says. “They are like an armor. They tell a story. And that story is constantly evolving as each woman who wears ‘Sima Collezione’ furthers our journey.” She adds, “Any woman who wears one of my dresses, they have to have a certain spiritual awareness. This is more than just a fashion. It’s a movement. We are making ‘soldiers of light.’”

From a scared, quiet, immigrant child who couldn’t even speak English who felt the world was against her, to an American scholar living a life at the top of society, Sima says she now knows how to “co-create with the creator.” She adds, “I have come full circle.” She is creating culture through fashion, and rescuing others through her charitable work. She is also teaching strength and leadership to women and children that she wishes she would have had as that little girl crying over being ripped away from her loved ones and motherland.

Fashion with a Purpose

“I am here to give love.” Sima says, “To children, and to the child inside us all.” The brand’s mission statement is “to bring out the inner beauty of the women who wear Sima Collezione, and to share the story of the brand so that it will empower others to live their dreams.” A portion of every dress sold goes to charity to help women and children, including political refugees.