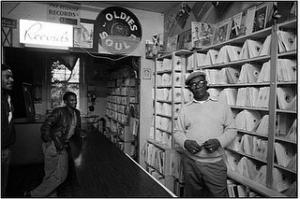 Two years before Chris Blackwell, founder of Island Records, started importing Jamaican music to England in the 1960s, George ‘Peckings’ Price had brought the sound of the Island to London and beyond.

Music for George ‘Peckings’ Price started in Kingston, Jamaica where he formed a partnership with Coxsone Dodd, legendary producer from Studio 1. They set up their own sound system, which included members like Lee ‘Scratch’ Perry and Prince Buster. To stay ahead of their rivals Coxsone would travel to the US to collect music exclusives, leaving Peckings in charge of bookings and arranging the dances.

In 1960 George decided to come to the U.K., taking with him a suitcase of vinyls from Prince Buster and Coxsone. Peckings supplied UK based Jamaican soundmen like Duke Vin, Count Suckle and Daddy Vego with RnB, Ska and Reggae recoprds, before opening his own record label and shop in 1973. He would go on to cater for legendary sound systems like Coxsone, Jah Shaka, Fatman, Hawkeye, Dub Vendor, Daddy Cool and even a young David Rodigan.

When George Price died in 1994, the Peckings legacy was continued by his sons. Tony and Trevor continued with the shop, whilst the two younger brothers – Chris and Duke – took the Peckings Records label to another level, solidifying its place in reggae history.

Peckings Records has been responsible for breaking some of the most influential reggae artists of the last 2 decades including Bitty McLean, Gappy Ranks, Peter Hunningale and Tarrus Riley. The label has released almost 100 records and albums since 1994, and in recent years was awarded both best label and producer at the British Reggae Industry Awards.

To commemorate almost 60 years since the founding of Peckings Records a blue plaque will be placed outside the original label and shop address in Hammersmith.

You can also watch the event via Zoom! Please register on with Eventbrite on the link below:
https://www.eventbrite.co.uk/e/pioneering-record-label-peckings-records-is-honoured-with-a-blue-plaque-tickets-288841040327

Quotes:
Founder of the Nubian Jak Community Trust, Jak Beula, said: “Peckings Records is an oak tree that grew from the acorn of Jamaican music enthusiast, George Price, whose love for the music of his island helped to create the phenomenon of Ska and Reggae in the United Kingdom.”