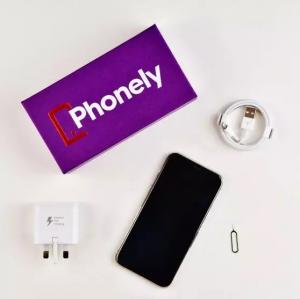 Refurbished iPhones are much better than used or second hand phones because they come with 12 months warranty, FREE shipping and packaged in our branded box.

Our phones were owned by someone else so they are second hand iPhones and are used iPhones as they are not new. However, they have been refurbished by Phonely and returned to their factory state”
— Phonely

Refurbished iPhones: the best for less
iPhones are generally considered the best smartphones you can buy, certainly for iPhone enthusiasts, there’s no alternative. Many will wait in line for hours, even days, to get the latest generation of iPhone.

For those of us who want a great phone, but also want to save a little money, refurbished iPhones are a bargain. You get the same technology, often within a few months of the release of the latest version, for hundreds of euros less.

Let’s look at what a refurbished iPhone is, how it differs from a new phone, and if it’s worth the money.

What is a refurbished iPhone?
When electronics are refurbished, they are restored to their factory state. A refurbishing company, like Phonely in Ireland, will purchase a late-generation, used iPhone from a consumer. Often, those consumers are trading in their phone, not because it doesn’t work, but because the newer version of iPhone has come out and they want it.

The used iPhone is then completely restored by technicians. All the former user’s personal data is deleted. The most up-to-date software is loaded into the phone. The case and glass are cleaned and repaired or replaced if necessary.

A refurbished phone is virtually indistinguishable from a new phone, except for the price and some minor scratches.

Anything like a new iPhone costs more than refurbished because, well, it’s new. It comes packaged from the factory, as opposed to being packaged by the refurbisher. In other words, you’re paying for the newness, even if the functionality is identical.

WHAT IS THE COST DIFFERENCE BETWEEN NEW AND REFURBISHED?
As of this writing, January 2021, the iPhone 12 is the latest iteration.

That means that there are a number of iPhone 11s on the market as people upgrade to the latest version.

Meanwhile, one can still buy a new iPhone 11 as it still works fine on all mobile phone networks. In fact, Apple still supports all iPhone models from the iPhone 6s and newer.

Important note: iPhones older than the iPhone 6s are no longer supported, so the software is getting obsolete and might become vulnerable to hackers.

The cost difference gets even larger as you move toward older versions, like iPhone X, 8, 7, and SE. In fact, Apple is no longer selling the iPhone X or older versions, but some carriers will still sell you a new X, XS, or XS Max.

In short, you’re saving over €100 by moving to the refurbished, one-iteration older iPhone and you save much more, even 50% or more, when you look at older versions.

Is there a functional difference between new and refurbished iPhones?
There shouldn’t be but it depends where you buy your phone.

The software is always updated to the latest version, including updates and patches from Apple, as of the time we put it in the box after refurbishing. In other words, you’re not going to have to sit and wait for four years’ worth of updates to load into your phone.

When you open it, it will guide through the setup just like a new iPhone. The former user’s information will not be in there, and they have no access to your phone.

In short, your refurbished phone has all the same amazing functions as a new iPhone. All that’s missing is the hugely inflated price for “new”.

Refurbished is better for the environment
A refurbished phone is one more phone that’s kept out of landfills or that needs to be recycled right away.

Sadly, every year, hundreds of millions of smartphones are simply discarded into the trash where they will sit for thousands of years, the plastics, advanced glass, and circuitry unable to be broken down.

By purchasing a refurbished iPhone from Phonely Dublin, you’re helping us extend the useful life of that iPhone by years. Since Apple will usually support iPhones for five years or more after their initial release (and the phone will continue to work for years after that), you can potentially keep that phone in use and out of the refuse cycle for half a decade or more.

It’s also a signal to phone manufacturers, like Apple and others, that consumers want products that last. This might lead to them making products that last longer and to them supporting those products longer, with software updates and security patches.

A better investment
Few of us can afford to simply purchase iPhones as soon as they come out, at least not without thinking about it, saving up our money, and wondering if it’s a good idea.

Since the only difference between a new iPhone and refurbished iPhone is appearance (usually minor wear and tear), why would you want to pay €100 to €300 more for the same phone just so you can say it’s new?