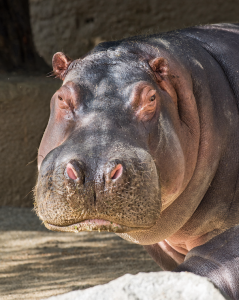 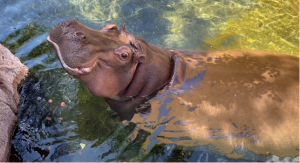 Transporting a 3631 lb. animal from LAX to HNL

It is such a thrill to take part in the balancing of zoo resident populations. We love the challenges associated with the transport of such incredibly special cargo.”
— Tanja Janfruechte, Pacific Air Cargo CEO

HONOLULU, HI, UNITED STATES, February 17, 2022 /EINPresswire.com/ — Pacific Air Cargo (PAC) has been transporting animals for over 20 years. They range from kittens and dogs to cows and horses. Every so often they are asked to transport a much more exotic animal as they did in 2020 when they flew two young giraffes to Honolulu. And yesterday, PAC shipped a Hippo named Mara from Los Angeles to Honolulu where she will become a companion for Louise, the resident hippo at the Honolulu Zoo. Hippos are gregarious by nature, living in large groups of up to 100 when in their natural habitat. But both hippos have been living alone, so it’s hoped that they will become fast friends and enrich each other’s lives.

Mara who weighs in at 3631 lbs. was born in captivity on September 24, 2003, at the Ellen Trout Zoo but has called the Los Angeles Zoo home for many years. Staff there adore Mara, saying she is very smart and is trained to open her mouth to have her teeth checked. The Honolulu Zoo’s hippo, Louise, is 30 years old and was also born in captivity, at the Denver Zoological Gardens.

Mara arrived in Honolulu early on February 16 accompanied by two Los Angeles staff members, one of whom is a veterinarian. First to be off-loaded from the airplane, Mara was carefully cared for as she made her way under special police escort to the Honolulu Zoo. And because hippos are considered high risk for COVID-19, all those who have come in contact with her as she’s traveled have been wearing protective PPE equipment.

“It is such a thrill to be part of Mara’s journey to her wonderful new life in Honolulu,” stated Tanja Janfruechte, Pacific Air Cargo CEO. “We love the challenges associated with the transport of such incredibly special cargo.”

Hippopotamus is a Greek word for “water horse” though their closest relatives are whales and dolphins. And while they cannot swim, they can gallop along a riverbed and an adult can hold its breath for up to 30 minutes. The hippo is considered the third largest land mammal after the elephant and rhinoceros. They are listed as Vulnerable by the IUCN (International Union for the Conservation of Nature) and are threatened by habitat loss, poaching for their meat and ivory canine teeth. Hippos also can suffer from disease and drought which can be influenced by climate change, so the few in captivity are cherished.

“Pacific Air Cargo is pleased to be able to give back to the community by flying Mara to Honolulu where she will no doubt give great pleasure to the many local families who visit the zoo each year,” said Paul Skellon, Pacific Air Cargo Director of Marketing. “We’re a company that loves animals in all shapes and sizes!”

Visitors to the Honolulu Zoo will soon have the opportunity to see Louise and Mara together daily between 10:00 am and 3:00 pm. If one is patient the hippos can be observed doing their “water ballet” that is like a slow-motion gallop through the viewing window of their exhibit.