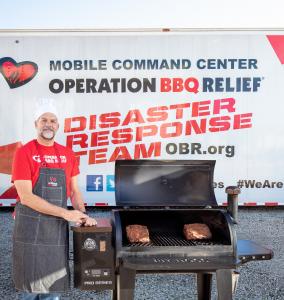 Mike Golic, former nine-year NFL veteran and radio host for ESPN’s “Mike & Mike,” will bring awareness to the mission of Operation BBQ Relief on the national level as its official spokesperson. Passionate about barbecue and serving his community, Golic will support Operation BBQ Relief’s disaster relief and The Always Serving Project programs.

“Operation BBQ Relief has touched so many lives in so many communities across the country,” said Mike Golic. “Every day, they focus on how they can help someone else in need with the healing power of a warm meal. After learning more about this organization and their passion for barbecue, this was a perfect fit for me; and I knew I wanted to be involved. It is a true honor to be a part of their team and I look forward to supporting them in any way I can.”

Among his first duties, Golic is hosting Operation BBQ Relief’s Celebrity BBQ Academy and Golf Classic on May 24, 2021 at Nicklaus Golf Club at Lionsgate in honor of the organization’s 10th anniversary. If interested in participating or becoming a sponsor for the golf tournament, please visit www.obr.org

Golic joined ESPN in 1995. During his time with the worldwide leader, he was best known as half of the popular morning show, “Mike & Mike” and later “Golic & Wingo.” His stellar 23-year run on ESPN Radio earned him a spot in both the Radio and NASB Hall of Fame. He also served as an NFL studio analyst on “NFL Live” as well as a color commentator for Arena, NCAA and NFL football. Prior to joining ESPN, Golic, a nine-year NFL veteran, played for the Houston Oilers, Philadelphia Eagles and Miami Dolphins.

About Operation BBQ Relief
Operation BBQ Relief is a 501(c)(3) nonprofit organization that supports communities following natural disasters with hot barbeque meals to those in need and on the front lines. After the devastating tornado in Joplin, Mo. in May 2011, competitive pitmasters from eight different states answered the call to feed displaced families and first responders and served over 120,000 meals over 13 days. This experience was the catalyst that started what Operation BBQ Relief is today. With the help of more than 14,000 volunteers, Operation BBQ Relief has provided over 9 million meals throughout the United States. In response to the COVID-19 pandemic, the organization has provided over four million meals to first responders, medical workers, veterans, families and organizations affected by the pandemic. In 2017, Stan Hays, CEO and Co-Founder was recognized as one of the “CNN Heroes” for his work with Operation BBQ Relief. For more information, visit obr.org or follow on Twitter, Facebook, and Instagram at @opbbqrelief.

19 Years After Their Daughter Died, Parents Meet the Doctor Who Tried to Save Her Life