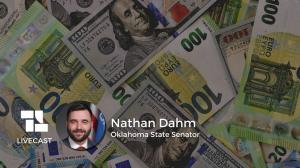 This generation has no clue about communism or socialism. Most of them think ‘socialism’ means ‘social media’ – they have no idea what it truly entails.”
— Oklahoma State Sen. Nathan Dahm, R-Broken Arrow

“This generation has no clue about communism or socialism,” said Dahm. “Most of them think ‘socialism’ means ‘social media’ – they have no idea what it truly entails.”

Dahm recently joined the Truth & Liberty Coalition livecast to discuss a number of issues, including how to respond to socialism by fighting for conservative values.

Dahm’s missionary parents moved their family to Romania in 1994. As an American boy in a former communist nation, Dahm witnessed the destructive nature of socialism in real life. During the family’s time there, Romanians suffered from substandard healthcare, limited food supplies, and skyrocketing inflation.

“Their currency became so worthless that, at one point, they dropped four zeros off of their currency because it had just been so devalued,” said Dahm. “It was the second-worst inflation in the world.”

When Dahm returned to Oklahoma as an adult and saw the rising popularity of socialism in America, he became involved in government. For Dahm, legislating against socialist policies – especially in the wake of government lockdowns and the restriction of rights – is part of a larger battle. Over his nine years in the state Senate, Dahm routinely championed constitutionally conservative legislation, even when some members of his party would not.

“So many of them have this idea of ‘That’s not the hill to die on; that’s not our battle,’” said Dahm. “Well, if you don’t engage in those battles – if you don’t fight a battle on that hill that the Left is trying to take over – they will take it over because you’ve ceded that ground.”

According to Richard Harris, Truth & Liberty Coalition executive director, “Sen. Dahm’s tenure in the Oklahoma Legislature has been a faithful and vigorous stand for the principles of freedom and limited government. America needs like-minded member of the legislators of all our states.”
Learn more about Dahm by visiting his website.

About Andrew Wommack:
Andrew Wommack is president and founder of the Truth & Liberty Coalition, Andrew Wommack Ministries, and Charis Bible College. He and other Christian leaders established the Truth & Liberty Coalition to educate, unify and mobilize believers in Jesus Christ to affect the reformation of nations through the seven mountains of cultural influence. Since 1968, he has taught God’s Word with clarity and simplicity, emphasizing the unconditional love and grace of God. His vision is to spread the Gospel as far and deep as possible through his daily Gospel Truth television program, broadcast nationally and internationally, as well as through GospelTruth.TV, his internet television network.