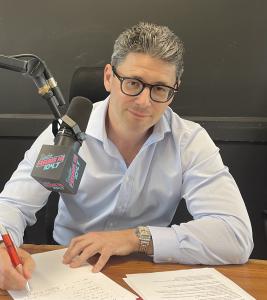 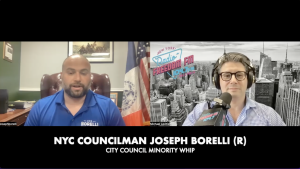 NEW YORK, NY, USA, May 25, 2022 /EINPresswire.com/ — NEW YORK, May 24, 2022, Joe Borelli, Republican Minority Whip on the NYC Council, discusses how he is managing to cooperate with the NYC Mayor, Eric Adams, and about his plans to cede Staten Island from New York on The Michael Levitis Show, Radio Freedom, FM 104.7. Borelli also shares his thoughts on why Russian speaking Americans vote for Republicans.

Apart from criticizing the NYC Mayor for Vaccine Mandates and firing workers, Joe is ready to support him in dealing with criminals and raising the bars on public safety.

On the show where Michael Levitis digests Politics and Business for the Russian- speaking community in New York, the Minority leader of the Republican Party in the City Council also explained how Staten Island could survive without getting the funding from New York City.

Joe said that Staten Island has more value in Real Estate as compared to other cities like Miami, Omaha, Nebraska, and Atlanta. He pitched to implement the same tax rates in Staten Island as in the other cities to generate more revenue as Property Tax is the major source for cities to raise funds.

He also said – “The truth is that City Hall in New York City is too big. It’s bigger than 47 States.” followed by, – “So we are a giant behemoth that one little place like Staten Island gets lost in so giving Staten Islanders the right to have a say in their own government is a good thing.”

Being a Minority Leader in the Council, Joe says that it’s a challenge to get the bills passed, knowing that there wouldn’t be a majority of votes. But there’s still a lot that can be done if less time is spent criticizing each other.

The show host, Michael Levitis, took the opportunity and asked Joe about the primary concerns faced by Russian-speakers in Staten Island. Responding to this question, Joe said that the biggest issue faced by the Russian-American community in Staten Island is education.

Adding some facts to his answer, he talked about how the previous administration tried to shut down various Staten Island Tech school programs. Still, the Republicans won the fight against this decision with a new Mayor.

Moving towards the end of the conversation, Levitis eagerly asked why Russian speakers incline more toward the Republicans.

In his response, Joe put forward that Russian-speakers are mainly business owners who work to earn their own money. They value education and religion, which comprise the core fundamentals of the Republican party.

At the end of the conversation, Joe informed the listeners of the show that issues related to homeownership are the number one priority of Republicans.

The Michael Levitis Show streams on Radio Freedom, FM 104.7, and covers the Political and Business news for the Russian-speakers in New York and Florida. To be a Guest on the Show or for Media Inquiries please contact Michael Levitis at MLevitis@me.com.