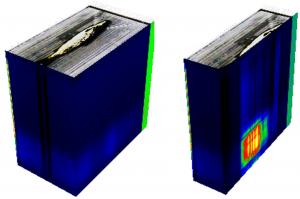 Illustration of the hyperspectral measurements as a 3D image cube, i.e., a hyperspectral cube. The cube to the right shows a cross section through the fish lateral axis

WOBURN, MA, USA, September 22, 2021 /EINPresswire.com/ — Smoltification is a complex series of physiological changes that allow young Atlantic salmon to adapt from living in fresh water to living in seawater. In salmon farming, this transition from “parr” to “smolt” is controlled using lights or functional feed to ensure a continuous and predictable supply of fish to grocery stores, restaurants and other seafood markets.

Scientists at SINTEF, one of Europe’s largest independent research institutes located in Trondheim, Norway, recently developed a hyperspectral imaging (HSI) system1 to study the vital aspects in detecting smoltification, relying in part upon a BitFlow Camera Link frame grabber to grab high-speed video frames for analysis at more than 100 frames-per-second.

The ability to verify smoltification is critical since incomplete seawater adaptation may result in poor animal welfare and increased mortality. Animal welfare is of increasing importance in salmon farming, as the industry is under pressure to improve production and farming operations due to ethical concerns. Conventional smoltification assessments measure chloride content in blood samples after exposing fish to saline water, or by detecting the presence of ion-transporting enzymes through analysis of tissue samples from gills. These methods are time-consuming so only a few salmon are typically tested from populations of several hundreds of thousands of fish.

To evaluate the robustness of its HSI approach, SINTEF placed emphasis on collecting diverse data with variations in fish color, patterning, size, and shape using three different salmon farming sites. Data were collected weekly in synchronization with the sites’ respective production and testing schedules. A Shuttle SH110G computer with Intel i7 processor had the BitFlow frame grabber installed to grab frames from a Specim® FX10 hyperspectral camera (Figure 1) equipped with a 23 mm/f.2.4 (OLE23) lens. Exposure settings were regularly adjusted depending on local conditions and the state of the fish. And because smolt transition involves salmon becoming more reflective, shutter speed was adjusted to keep the exposure within the sensor’s dynamic range. To make all data sets comparable, despite differences in ambient lighting conditions and exposure settings, all were normalized for comparison using white and dark reference images.

The raw data obtained from HSI were multidimensional images of individual fish, including their background. Each layer of this multidimensional image represented a single gray-scale image corresponding to the intensity of the reflectance measurement at a specific wavelength. When stacked, all the layers and reflectance measurements represented a 3D cube (Figure 2). A step-wise procedure was used to process and analyze the data so the low-dimensional spectral characteristics could be observed, and classification of parr or smolt made possible. Wavelengths were optimized by factoring in water temperature, dissolved oxygen, water opacity, and color, as well as lighting and feeding regimes.

Upon conclusion of its study, SINTEF demonstrated a HSI system where only three wavelengths are needed to identify smoltification status of Atlantic salmon, and that this system could serve either as a supplementary or free-standing verification tool in fish production. In doing so, the researchers also laid a pathway to manufacturing low-cost HSI instruments for use in production tanks or integrated in existing sorting and vaccination systems for faster, wider and more cost-effective population sampling of Atlantic salmon.