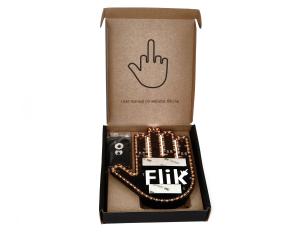 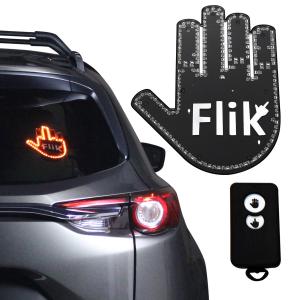 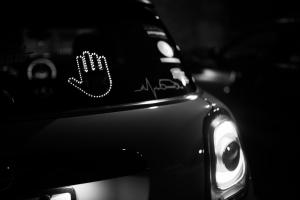 After just six months since going viral on TikTok, the Flik has become a standard for driver feedback and Amazon’s fastest growing car electronics.

UK & US, October 17, 2021 /EINPresswire.com/ — Aggressive driving is a factor in over half (54%) of all fatal motor vehicle crashes, according to the AAA Foundation for Traffic Safety. With a mission to defuse violent situations on the road, one company has created a fun way to allow drivers to communicate safely.

The Flik is a remote-controlled light that allows users to wave or give the middle finger to other drivers. Seriously.

A viral sensation in 2021, the Flik found a home in tens of thousands of American vehicles through word-of-mouth and a slew of viral videos on social media. Founder, Evan Tripp, admits the product is consistently sold out stating that, “The demand is higher than we ever imagined.”

Driver-to-driver Communication
Mr. Tripp, explains: “The Flik is a ton of fun but it also allows for safe communication. Bad things happen on the road, and drivers are going to find a way to provide negative feedback. With the Flik, our customers can communicate in a way that is safe and compliant with traffic laws.”

The Flik has amber yellow, non-flashing LEDs, which threads the needle for most U.S. states’ requirements for aftermarket lights. The middle finger gesture itself is protected by the First Amendment of the U.S. Constitution.

Technical Aspects
With only a wave and a middle finger option, the Flik is simple to use. However, the product design itself is quite impressive.

For example, the Flik determines the difference between night and day and adjusts LED brightness accordingly. The bright setting allows the Flik to be easily seen during the day, and the dim setting means the Flik isn’t blinding other drivers at night. Other features allow for extended battery life, usage in extreme temperatures, visibility through tints and tilted windows, and long range connection with the RF remote.

Demand for Driver Feedback Devices
Standard issue vehicle signals are used to indicate driver action, e.g. changing lanes and braking, but drivers do not have a standard way to give feedback to each other. By standardizing driver feedback with the Flik, Mr. Tripp says, “Driver feedback increases driver awareness. By increasing driver awareness, we hope to encourage better behavior on the road.”

While the creators of the Flik hope to provide a safe, legal standard for driver feedback, most drivers want the Flik because it’s fun to use. As one Amazon customer wrote, “Super fun on the freeway when someone is tailgating. Was surprised when I turned road rage into laughter!”