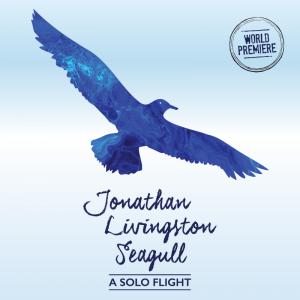 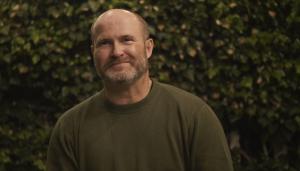 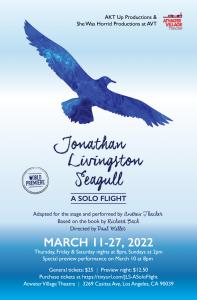 Banished to the Far Cliffs by his flock for daring to break with tradition, Jonathan spends his life in pursuit of his unbound passion for flight, not to scrape and scrabble for food—but for the joy of flight itself. Richard Bach’s bestselling 1970 novella “Jonathan Livingston Seagull” is brought vividly to life in Jonathan Livingston Seagull: A Solo Flight by Adapter and Performer Andrew Thacher, who invites you to join Jonathan on his journey through the here and now, and all of eternity, as he soars to the heights of perfection, freedom, and Love. Jonathan’s path from awkward beginner to passionate student and eventually to patient master is both wonderfully familiar and extraordinarily unique.

Thacher began tinkering with Richard Bach’s acclaimed novella, performing the first part as a staged reading in 2009. Since the Fall of 2021, the play has been developed in concert with a documentary film crew led by director and cinematographer Earnest “Nesto” Rhea, who recognized a unique opportunity to capture Thacher, director Paul Millet and their creative team on film as they brought the production from design meetings and living-room rehearsals to the professional stage. Journey to Jonathan will trace Thacher’s decade-long path from false starts to the realization of the dream of a full production with the blessing of author Richard Bach.

Andrew Thacher (Performer / Producer / Adapter) got his start in Tokyo, Japan, working in English-teaching television, radio and voiceovers for NHK Educational Corporation. A desire to push his limits led him back to the States where he worked on stage and on camera in Seattle and Portland before accepting a performer contract at Walt Disney World. Two years later, he and his wife Kelly relocated to New York so that Andrew could pursue theater. But it was opportunities in television that eventually blossomed, which inspired him to relocate to Los Angeles. Amidst his work in film and television, Andrew began tinkering with Richard Bach’s acclaimed novella “Jonathan Livingston Seagull”, performing Part 1 as a staged reading for the first time in 2009. A full production eluded him however, but after more than a decade of false starts, he is thrilled to bring A Solo Flight to life at last. Andrew is incredibly grateful to the members of his all-star Production and Creative team, including Paul Millet, who was his first and only choice for Director.

Paul Millet (Director) is the artistic director of Unbound Productions where he co-created Wicked Lit, History Lit and Mystery Lit. Paul has directed 19 world premieres with Unbound under all three banners. Outside of Unbound he has directed multiple productions and readings at venues all over the greater Los Angeles area including The Road Theatre, Theatre 40, The Blank Theatre, The Chance Theater, High Street Arts Center, and many others. He had the pleasure and privilege of directing Andy Thacher in the Wicked Lit production of The Doll in 2014 as well as multiple readings and development projects since then. He is beyond thrilled to be working with Andy on JLS: A Solo Flight. Paul also enjoys a successful career as a television editor and is a proud member of SDC, TCG and the Motion Picture Editors Guild.

Earnest “Nesto” Rhea (Documentary Filmmaker) is an emerging writer/director and editor with roots as a graphic artist and animator. His visual style and creative eye heavily contribute to the look of his film and music video projects. The passion he has for capturing ‘candid moments’ is what has led him to creating his company Epic House Cinema and producing various behind-the-scenes promo videos and mini-documentaries. He is known for writing and directing the short film “The Script” starring Jesse Spencer (CBS’s “Chicago Fire”; Fox’s “House M.D.”) and Jennifer Morrison (“House M.D.”; ABC’S “Once Upon a Time”), as well as directing “Forever No More”, written and starring Nkechi Okoro (Showrunner, The CW’s “All American”). Nesto has plans to adapt “The Script” as a feature film along with other projects currently in development.