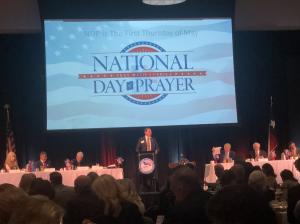 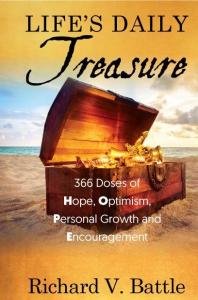 It is always important to pray. It is critical and significantly more important than ever now with the World divided on so many different issues.”
— Award-Winning Author, Richard V. Battle

AUSTIN, TX, UNITED STATES, May 16, 2022 /EINPresswire.com/ — The National Day of Prayer is celebrated in May and believers are encouraged to pray for local, state, and national leaders, military members, health care workers, first responders, schools, businesses, families, and others. Media commentator and award-winning author (his latest is ‘Life’s Daily Treasure’), Richard V. Battle was honored to serve as the Master of Ceremonies for the Texas Governor’s Prayer Breakfast in Austin.

“National Day of Prayer is a day when folks from both sides of the aisle, and every color, race, and creed… put their differences aside and gather to look up to God for blessings and guidance,” observed Battle, who presided over the 29th Annual Texas State Governor’s Prayer Breakfast in Austin on May 2nd. “Keeping politics out of an event like this is key!”

The National Day of Prayer, traditionally held on the first Thursday of May each year, is celebrated by Americans of many religions, including Christians of many denominations, including Protestants, Catholics, as well as Sikhs, Hindus, Muslims, and Jews.

Texas Governor Greg Abbott, no stranger to partisan debate, put politics aside and spoke on selfless service, sacrifice, and the power of prayer at the Governor’s Prayer Breakfast. Keynote speaker David Barton from Wall Builders, an organization dedicated to presenting America’s forgotten history and heroes, with an emphasis on the moral, religious, and constitutional foundation on which America was built spoke on the long history of faith in the fabric of America, and how the country’s founder’s faith and prayer were essential to our nation’s leaders.

“In a time of uncertainty, strife, and stress, people everywhere can find comfort through the power of prayer,” says Battle. National Day of Prayer became official by presidential proclamation in 1952 and has been followed for seven decades now, when the faithful pray, reflect on humility, and give thanks.

Battle encourages folks to pray more than just once per year. “It is always important to pray. It is critical and significantly more important than ever now with the World divided on so many different issues.”