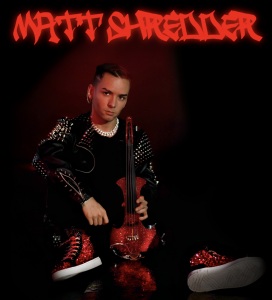 Launch of song, video, and new nonprofit solidifies Shredder as a virtuoso violinist.

The muscular music video is packed with an idiosyncratic blend of uptempo EDM beats with a mellifluous violin that can be viewed here https://youtu.be/-QtjuHYNAsE and benefits a nonprofit, The One of One foundation, in association with Aurora Violins, a Brazilian violin maker.

The high-energy video, directed by Montes.Way, features firey flames and a far-out Ferrari premiered on Youtube on August 10, 2021. The song continues to soar in the crossover scene and is available to stream on major music platforms everywhere.

Transcending genre, this sizzler of a song weaves emotive strings that move well beyond melancholia, propelling formidable fire listeners can step to.

At auction is a one-of-one custom electric violin entitled “Phoenix,” encrusted with over 7,000 Swarovski crystals, each handset intricately by an artisan. The violin was hand-crafted specifically for Matt Shredder by Aurora Violins (auroraviolins.com) and is one of the most valuable electric violins in the world, appraised at over six figures.

The encompassing project introduces Matt Shredder’s new nonprofit foundation, the One of One Foundation (oneofonefoundation.org).

The One of One foundation will be fully 501(C3) in the Fall of 2021. The foundation will utilize a portion of the proceeds from Matt Shredder’s bookings along with generous donations to aid in the purchase of musical instruments, toys, and clothing for foster children, as well as a variety of other charitable work performed in schools and institutions across the country.

“I want young musicians to realize playing an instrument is more than just regurgitating notes; it can be your voice when you feel like you don’t have one. It can be the reason that you need to keep fighting for yourself.” states, Shredder.

Known for his ability to draw his bow across the strings of her violin with electric enthusiasm, Matt Shredder was adopted from a neglectful and abusive environment at a young age. This trauma caused unique challenges for Matt growing up. However, picking up the violin at age 3 gave him an outlet as a child and through his teen years.

“I think as a kid, I distracted myself a lot from life with my violin. I didn’t socialize a lot outside of school. I remember being alone a lot. It ended up becoming the one thing I knew I could count on, no matter where life took me.” said, Shredder. “When I felt like I couldn’t trust anyone or the odds were stacked against me, my violin was always still there. It wasn’t until I was older and looked back that I realized my instrument had really saved my life. And I think it can do the same for other kids.”

Battling feelings of inadequacy, Matt’s goal through his music is to inspire young people who might be going through hardships that it’s okay to be yourself and embrace the qualities that make you different, as they can turn out to be your strongest assets. Every child truly is unique, special, and one of one.

“Our most difficult moments in life can truly be what define us. The feeling of not having anything left to lose can turn into life’s greatest motivator…” -Matt Shredder

At 26 years old, Matt Shredder is regarded as one of today’s gifted musicians. Adopted as a child from a deplorable environment, Matt knew what it was like to struggle with his identity growing up. Born in 1995 in Bristol, Connecticut, Matt picked up the violin at just three years old after seeing a cellist on TV, but being too small for cello, the violin was a more appropriate choice. Music was the outlet in which he ultimately chose to express himself as a child. Throughout his early teens, Matt experimented and ended up utilizing his skills as a classical musician with what he loved most; hip hop and rock n’ roll; learning how to produce music in the process and creating an entirely new genre dubbed “classical trap.” Some of his most significant early musical influences include violinists David Garrett and electronic and hip hop acts such as Skrillex, UZ, Lil Wayne, and Young Thug. At 16, not knowing anyone in the music industry and having no money, Shredder turned to his ability to perform any song by ear and began posting on social media. This resulted in Matt Shredder turning his passion into a successful career, performing across the globe for iconic brands including Six Flags, Lexus, CIGNA, Swiss Beverages, TrueValue, Air Canada, and more. Celebrities who have recognized Matt’s work include Neil Patrick Harris, Fetty Wap, TheFatJewish, Dustin Hoffman, and many more.

“Not everyone will support what makes you happy. We always have a choice; whether to let those people determine our future or to stay true to what we know we are capable of; and commit to achieving it…for the sake of ourselves and no one else.” Shredder proclaims.

Shredder occupies a truly unique space in music and has established himself as a pre-eminent performer exhibiting an impressive range. He is a genre-defying artist that electrically innovates while crafting a sonic soundscape that taps listeners’ imagination.

Matt Shredder is available to perform at festivals, nightclubs, casinos, and private events. To book, visit http://www.mattshredder.com or email info@allendalton.com.