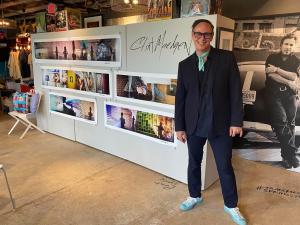 LOS ANGELES, CALIFORNIA, UNITED STATES, August 11, 2022 /EINPresswire.com/ — Delving deep into artistry with his panache for all things curious, Clint Maedgen spearheads his artistic career in New Orleans for over 25 years in a wild exploration of musical wonder. Maedgen’s artistic path is a rich tapestry of passion for sharing the healing power of music with the world – an outstanding performer, photographer, filmmaker, and textile artist who believes art is the ultimate healing force.

Charging through the industry with his more than two-decade-long experience as a multi-instrumentalist frontman for the rock band Liquidrone (c. 1992 to 2004), his punk-cabaret act evolved into something bigger as he led the musical band The New Orleans Bingo! Show (c. 2001 to 2012), a group that melded theatrical elements, music, and the edge-of-your-seat interaction of game shows. Playing around with short films, comedic skits, and head-bopping tunes, The New Orleans Bingo! Show went on tour with the Preservation Hall Jazz Band in 2007 and 2008.

Maedgen’s music has always been about understanding the chaos in our world, and his latest single is no exception. With powerful vocals, an infectious guitar riff, and lyrics that pack a punch, “Sandra Already Knows,” released last month and dedicated to one of the members of Patreon Panda Family, is a sure hit. Featuring Tif Lamson on drums and background vocals and Rick Nelson on bass, this song marks the continuation of Maedgen’s attempt to perceive everything around us through pop-rock tunes and thoughtful lyrics.

Beyond challenging his listeners with his mad-scientist mix of experimental and progressive music during the pandemic, he’s seeking to break ground by thoroughly musicalizing his work in private concerts and gripping weekly episodes that are a blend of Hollywood Squares meets Austin City Limits. As COVID-19 put distance between people and placed everyone in an economic downturn, Clint Maedgen found a way to make a quality living: by earning currency through nurturing connections with a sustainable audience through his Patreon page.

“People don’t buy what you do, they buy why you do it. And what better way to give access to your process than online with a worldwide audience?” says Clint, shedding light on how his Patreon gives his listeners a clear look at how he’s making his music. In addition, he believes that by doing this, he can stay connected to his 500 true fans, allowing them to be a part of the process, giving them the power to contribute to his music, and giving them a way to stay involved.

With 24 personalized songs Clint made for his subscribers who bought his photo series of French Quarter doorbell pillows, he was able to raise enough funds to shift beyond bedroom beats and record fan-inspired tunes in a studio, and Sandra Already Knows is the first of many to come.

This year, Maedgen led a solo show in Asbury Park, giving a harmonic, dreamlike backdrop to his fine art photography exhibition. The show was well-received by the public and critics alike, with many praising the artist’s unique approach to combining music and photography. Maedgen’s work has been exhibited in galleries and museums around the world, and he is considered one of the most innovative and creative artists of his generation.

Clint Maedgen connects with his audience by putting his heart into his songs while investing real-life stories into his lyrics. Shifting from an online concert into an interactive Zoom show with his patreons, his COVID-inspired shows provide a much-needed sense of community and connection in a time of social distancing.