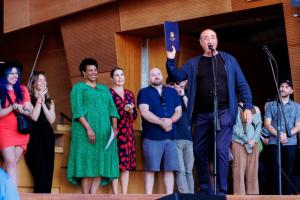 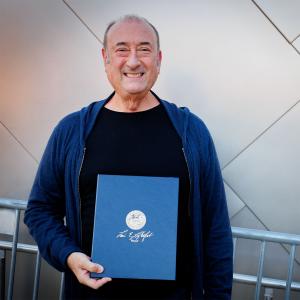 Joe Shanahan respectfully accepted the city’s proclamation on behalf of the venues located at 3730. N. Clark Street. Metro and smartbar were recognized for their 40 year anniversary operating as independent institutions as well as the four decades of work completed by Shanahan and his devoted teams past and present which inevitably changed the landscape of the live music communities on a national scale.

Apart from the recognition of founding and operating one of the few remaining independent performance venues in the country, Joe Shanahan was also acknowledged for his passionate work into the economic relief efforts for arts and music communities, both during and post the COVID-19 pandemic. His collaborations with CIVL on a national level were praised as well as his philanthropic efforts; campaigning for The Chicago Children’s Choir, Nourishing Hope (previously Lakeview Pantry), just to name a few.

The Mayoral Honoree Award was presented within Chicago Independent Venue Week and during the CIVL’s free concert at Millennium Park featuring an exciting lineup of emerging Chicago talent including Ric Wilson, Tasha, and Mario Abney & The Abney Effect Brass Band on July 14th, 2022. CIVL’s mission is widely known across Chicago who advocate on behalf of Chicago’s independent performance venues. The League acts to secure the long-term future of these and other venues for the benefit of communities and artists. Chicago’s independent venues provide thousands of jobs, as well as millions of dollars in salaries, revenues, charitable donations and taxes. CIVL strives to gain recognition for the essential role these venues have played in defining the music culture as it exists in Chicago today.

Born and bred in Chicago’s South Side neighborhoods of Evergreen Park and Beverly, Joe Shanahan has spent the past 40 years, alongside his devoted teams of past and present, contributing to the shaping of Chicago’s music community from his post on North Clark Street. In July of 1982, smartbar opened, quickly becoming the mecca for electronic and house music hosting top Chicago DJs like The Blessed Madonna, Derrick Carter, Frankie Knuckles, Superjane, and more. Shortly after, the space now known as Metro opened its doors and hosted R.E.M for the first show at the now legendary venue, inaugurating a legacy that has prevailed for 40 years and counting. Metro has played host to up and coming musicians as well as legends including Chance the Rapper, Foo Fighters, Jack White, Jamila Woods, Liz Phair, Lizzo, Metallica, Pearl Jam, Shirley Manson, Smashing Pumpkins, St. Vincent, and many more.

As Metro/smartbar grew, Joe Shanahan expanded and later opened Gman Tavern, a neighborhood bar and music room that has also hosted musicians including Chris Connelly, Chrissy Hynde, Jon Langford, Laura Jane Grace, Lenny Kaye, Mavis Staples, just to name a few. Today, now comprising Metro, Smartbar, and Gman Tavern, this staple of the music community continues to draw musicians and crowds from around the globe and remains one of the few remaining independently owned and operated music venues in the country.