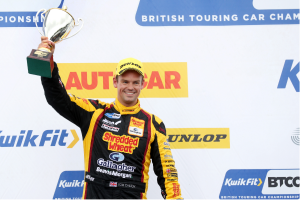 In July, MaXpeedingRods announced Tom Chilton has signed a one-year contract extension that will keep this relationship until August 1, 2022.

We share a belief that racing should be a never-ending quest to be the best on and off the track, just like what Mr. Chilton did, this is also the reason we created the MaXpeedingRods.”
— Henry Chen, MaXpeedingRods CEO.

HONG KONG, CHINA, July 30, 2021 /EINPresswire.com/ — This multi-year relationship between MaXpeedingRods, a global automotive aftermarket parts manufacturer and provider, and Tom Chilton had begun with 2019. Tom Chilton and competitiveness are synonymous and with an excellent career spanning the British Touring Car Championship, he fully embodies the values and pursuit of MaXpeedingRods.

MaXpeedingRods’ CEO, Henry Chen said “We share a belief that racing should be a never-ending quest to be the best on and off the track, just like what Tom did. This is also the reason we created the MaXpeedingRods and we are delighted to welcome him to our family, we focus on performance and quest the best.”

Frequently appearing on racing events, Tom is brilliant for many racing enthusiasts, He has spent most of his career competing in touring car racing and is often seen on different podiums. After making his BTCC debut at just 17 years old, as the youngest ever driver on the BTCC grid at the time, Tom made history just two years later – becoming the youngest race winner.

Tom’s signing is one important part of their plan in 2021, MaXpeedingRods plans to reach a strategic alliance with the top-class product R&D teams in the industry to improve the levels of manufacturing, modification, and skillset of racing. To achieve this goal, MaXpeedingRods is excited to invite Tom to visit their workshop. When Tom discussed with engineers on products improvement and drove the car which is modified with MaXpeedRods productions. He said, “It is so exciting after all the hard work we have put in the new connecting rods and the new turbo, see the new performance gains after modification.”

With an 861,000ft2 manufacturing facility and twelve different production lines, MaXpeedingRods focuses on providing high-performance and affordable auto parts for all drivers, modification fans, and racers, that embodying the infinite possibility of car modification. These auto parts reflect the confident values of Tom Chilton and the MaXpeedingRods brand.

MaXpeedingRods believe there is more to racing than passion and wanted to create an efficient, powerful, affordable production enabling racers to coverture their own dreams. Designed around the principle of universally flattering product demands for all drivers and modification fans, the products offer buildable effects from the daily-driving natural to the race performance.

After launching over fifteen years, the auto parts brand MaXpeedingRods mainly producing and selling connecting rods, crankshafts, turbochargers, and coilovers, etc. They have garnered a large following with incredible two-hundred percent sales growth. And now, they have over 500 employees and operates in America, Europe, Australia, and Asia which services more than 4 million people. The brand has received huge momentum in many countries with 1.5 million user growth annually.