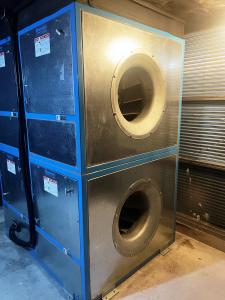 Spelman College needed to replace its belt-driven fan in a hurry, but space constraints made it difficult. Mainstream delivered fast.

The fan requiring replacement was in a tight space with even tighter access. The client was considering replacing the entire air handling unit, but this was not realistic due to the required timeframe, and challenges due to space and constraints.

Mainstream delivered a fan array to replace the old, belt-driven fan. The fan array was installed in two days over Christmas break.

The modular cubes were a perfect solution to the access challenges and simplified the installation. Although the tight access required the fans to be brought in through a louver in the wall, our solution made replacing the air handling unit, or even installing a pressure wall, not required.

Mainstream remains an industry leader, refining the process of designing, replacing, and installing fan arrays. Mainstream’s IntelliCUBE EC Fan arrays allow for expedited retrofitting of air handling units. These EC fans require no maintenance, are significantly quieter than belt-driven fans, and are highly energy efficient. IntelliCUBE EC fans are smaller and easier to transport. They can replace large, aging, or broken fans with an array of smaller fans.

Mainstream’s IntelliCUBE EC fan array systems have become the first choice for retrofitting commercial and industrial air handlers. More benefits include a variety of fan options and fast quotes. Mainstream is a Berkeley Heights, NJ-based HVAC manufacturer with a focus on making the process of quoting and installing fan arrays and other HVAC components as easy as possible.

About Mainstream
Mainstream was founded in the early 90’s as a family business in Northern New Jersey, manufacturing coils and other HVAC components. Over the past three decades, Mainstream has grown and evolved into one of the leading manufacturers of air handling systems and equipment. Continuous, iterative product development, paired with a steady expansion of production capability and a strong culture of service, has Mainstream positioned for robust growth throughout the next decade.

Mainstream’s core values of knowledge, innovation and integrity are the principles that have propelled the growth of the business, and characterize what clients have come to expect from us.