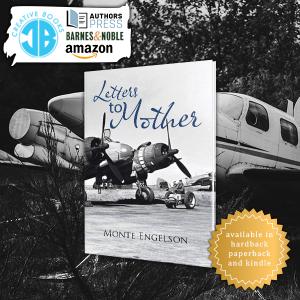 I know it’s World War II But, Can I Send You a Letter?

A story based on the collections of letters that were sent by Harold to his mother set between the years 1935 to 1945.”
— Monte Engelson

LONDON, UNITED KINGDOM, March 29, 2022 /EINPresswire.com/ — Monte Engelson’s Letters to Mother is a story told through letters of a unique, momentous moment in our short time on this short voyage of life. This book is a treasure as you hear the voices of those affected by the Second World War as written in their own hand. It will bring readers back to the memories of how many people died and suffered from the onslaught and aftermath of one of history’s most horrific wars. The letters started with a simple life, of living with society next to nothing that all leads with a conclusion that is the end of the Second World War.

The story is based on the collection of letters that Harold sent to his mother between the years 1935 to 1945. Harold and his wife were with the British Columbia Police and were based on the coast and later Northern B.C. World War II was soon to happen. Even before the war was declared in Germany in 1939, Harold wanted to join and do what he could for freedom and country. He was one of the lucky people in active combat and managed to come back. His service in the air force left him with lasting
memories that changed his life and those around him. It is a turning point in history.

Life would have been unthinkable without this outcome. The author, Monte Engelson, lives in the Cowichan Valley. Before he retired in 1997, he was a computer research teacher in Cowichan School District. After his wife, Carol, passed on, he moved into a condo and kept himself busy by doing printing projects for the Masons and Shriners. Monte’s ancestors left many footprints during the early history of British Columbia.