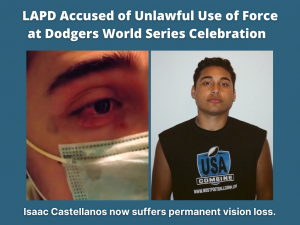 A new lawsuit alleges the LAPD used unlawful use of force during an impromptu celebration of the Dodgers’ 2020 World Series Championship.

There is absolutely no reason for the police to fire rubber bullets at people peacefully celebrating.”
— Pedram Esfandiary, an attorney for Mr. Castellanos

Plaintiff Isaac Castellanos, 23, was one of several hundred Dodger fans who gathered near the Crypto.com arena (formerly known as the Staples Center) on the night of October 27, 2020 to celebrate the team’s clinching the 2020 World Series Championship title. According to the complaint, an LAPD officer shot Castellanos in the right eye with a “less lethal” munition during the Dodgers World Series celebration. Castellanos, who now suffers from permanent vision loss, was allegedly not warned or asked to disperse before officers fired at him.

Attorneys Pedram Esfandiary, Monique Alarcon, and Timothy Loranger from the law firm of Baum Hedlund Aristei & Goldman represent Castellanos in his case (U.S. District Court for the Central District of California, Case No. 2:22-cv-1165). The lawyers say their client’s participation in the peaceful exercise of freedom of speech and assembly turned into a violent nightmare due to the LAPD’s “escalatory and dangerous crowd control tactics,” which violated their client’s rights under the U.S. and California Constitutions, as well as statutory and common law rights. The lawsuit further accuses LAPD of negligence, assault, and battery.

“There is absolutely no reason for the police to fire rubber bullets at people peacefully celebrating,” says attorney Pedram Esfandiary. “Our client posed no threat to anyone, yet officers decided to indiscriminately shoot at him and others without giving any noticeable warning and without telling people to leave the area.

“The City of Los Angeles has repeatedly failed to provide adequate training for crowd control and dispersal, including the use of rubber bullets and other ‘less-lethal’ munitions,” says attorney Monique Alarcon. “This failure placed our client at great risk of serious injury, and it will continue to put countless others at risk until the city takes long-overdue steps to correct the problem.”

The following are allegations only. There has been no determination of liability in this case.

Just past midnight on October 28, 2020, at approximately 1:00 a.m., Isaac Castellanos and his friends were peacefully standing near the intersection of W. 11th Street and Hope Street, approximately two blocks east of Crypto.com arena.

Castellanos saw LAPD officers advance toward the crowd, then heard weapons being fired. Hundreds of people began screaming while running away from the LAPD officers. Castellanos turned back to account for his friends, then he noticed some of them were already running away from officers. As he turned in the direction of the officers to grab one of his other friends to leave the area, he was struck in his right eye by a “less lethal” munition (LLM) fired by an unidentified LAPD officer who was approximately 60-90 feet away.

Immediately after being shot in the eye, Castellanos felt excruciating pain and experienced a loss of vision. He and his friend immediately left the area, fearing that they would be hit by additional LLMs that the LAPD officers were indiscriminately shooting towards the crowd.

Castellanos never presented a threat of danger, violence, or self-harm. LAPD never issued an order to Castellanos to disperse or leave the area.

At the time of the incident, Castellanos was 22 years old and in the process of completing his final year of college at California State University, Long Beach. He enjoyed a successful career as an esports athlete and streamer, and only a few weeks before the incident, Castellanos won a prominent gaming tournament, which was only the beginning of what would be a bright and lucrative future in e-gaming.

While Castellanos’s injuries are still being evaluated by medical professionals and other experts, his permanent loss of central vision and persistent mydriasis continue to interfere with his day-to-day activities, including studying, working, cooking, and athletic activities.

According to the complaint, LAPD failed to follow established guidelines, rules, and procedures—including their own—for the use of LLMs and crowd control tactics. The lawsuit further accuses LAPD of:

• Failing to appropriately screen and train their employees.
• Failing to investigate and discipline their employees for misconduct.
• Negligently authorizing and ratifying the use of LLMs.
• Providing improper training that condoned the escalatory and dangerous tactics employed by LAPD officers.

Baum Hedlund Aristei & Goldman is a national plaintiff’s firm that represents individuals and communities subjected to police misconduct in Los Angeles and throughout the state of California. The firm vigorously advocates on behalf of individuals peacefully gathering or peacefully protesting racial injustice and other people who suffer serious injuries or death due to police misconduct. Across all areas of practice, our attorneys have won more than $4 billion in verdicts and settlements.