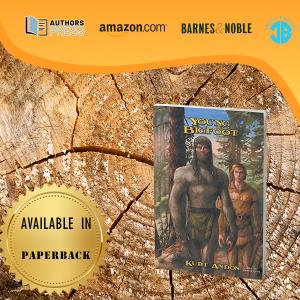 A Fantastic Adventure of a Man and Mythical Creature

Unfolds in Writer’s Work of Fiction

LOS ANGELES, CALIFORNIA, UNITED STATES, April 6, 2022 /EINPresswire.com/ — Kurt Andon, a Hollywood actor since 1969, extends his artistic capabilities as he goes beyond the big screen and enters the literary scene. Young Bigfoot, his new novel, is a story that perfectly blends legendary folktales and historical fantasy. Young Bigfoot, a vivid tale and a well-written short story, revolves around two distinct characters – a human kid and a creature that everyone believes to exist only in the imagination.

PRESS RELEASE | LA BOOK FAIR 2022
The two existed on opposing sides of the earth. Young Bigfoot, an eight-and-a-half-feet-tall, 450-pound- weighing creature, with broad shoulders and narrow waist, lived on a rocky mountain with its outcrop staring out to the distant forest and valleys. Penn, a son of a hardworking farmer, was on the other face of the world – 800 miles east to where Young Bigfoot was. When Buck, Penn’s father, leads his wife and their kids to travel west to seek a more promising life, Penn and Young Bigfoot’s distance starts to dwindle. As Penn and his family finally found a place to settle, Penn meets Young Bigfoot, and that’s when the legendary friendship between the two starts to unravel.

Book copies are available on Amazon, Barnes & Noble, and other online book retailers.