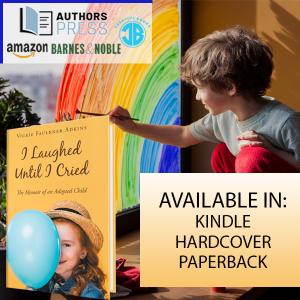 Writer’s Memoir is a Tumultuous Journey of Separation and Reunion

Parents are children’s homes. Then there are millions of homeless children in the world.”
— Vickie Faulkner Adkins

LOS ANGELES, CALIFORNIA, UNITED STATES, April 7, 2022 /EINPresswire.com/ — Vickie Faulkner Adkins’ I Laughed Until I Cried: The Memoir of an Adopted Child is a voice reverberating in the dark, guiding every abandoned and adopted child who are stuck and lost in the darkness of their identity and worth.

As an effect of the war, countless families have been displaced, and children got separated from their parents. Some found their way back but more were unfortunate and ended up in adoption homes. Vickie was not separated from her parents because of the direct effect of war, but somehow, she ended up in the hands of the notorious Georgia Tann, the infamous “Mother of Adoption in the United States” along with 5,000 other children.

To grow up an orphan is psychologically taxing, especially if you knew you were sold by your own father, exactly like what happened to Vickie. Her parents drifted in and out of her life but never really took her back, and this inflicted Vickie with more emotional wounds, insecurities, and horrors. Although the issue addressed in the book is heartbreaking and tragic, Vickie still wrote her biography with humor. This is her way of saying that tragedy can coexist with comedy in our lives and that we can stop the pain and feeling of unworthiness from being passed down from one home to another through love, acceptance, and laughter.

“The striking memoir of the author opens up the heart and exposes our insecurities. Were we ever loved? Wanted by those whose love we rely on most, our mother and father? These questions she asks with the added horror of being passed from home to home and landing in one of a woman she knew nothing about and in whose home she is raised with other acquired children. The author with great recall and humor takes you on this journey. You will want to stay for the whole ride,” says Jennifer, an Amazon customer.

Vickie was born in Chewalla, Texas, however, she was relocated to Houston, Texas after being kidnapped at the age of three and adopted to a prominent family. She is the first child to be adopted into the Faulkner’s family. Three others followed after.

I Laughed Until I Cried: The Memoir of an Adopted Child
Written by Vickie Faulkner Adkins
Kindle |
Paperback |
Hardcover |

Book copies are available at Amazon, Barnes & Noble, and other online book retailers.