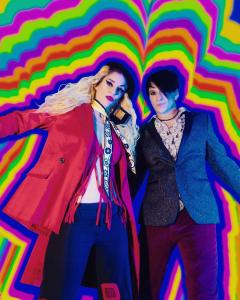 LAS VEGAS, NEVADA, UNITED STATES, April 13, 2022 /EINPresswire.com/ — Back on the scene with a powerful new single, the modwave, genre-bending duo, Fans of Jimmy Century, is gearing up to take 2022 by storm. This new track, Va Va Voom to the Moon, is currently featured in the hit Netflix television show, Emily in Paris (Season 2, Episode 1), and they are ready to release it for the world to dance to. This beautifully produced dance track, as well as two new remixes of it, will be available for listeners to experience on April 15th!

The Las Vegas based duo features Alicia Perrone on Vocals and Victor James on Bass. FOJC is inspired by challenging the rules of genre, and creating characters to elevate their songs and videos. They love to create very out of the box music videos, much like their 70’s inspired prank music video for their iTunes-charting single, ‘Best of My Generation’, which takes on a spoof of the ever loved buddy comedy films. The difference between this and their kitsch, vampy song ‘All of My Friends are Ice Queens,’ perfectly encapsulates their love for mixing music genres.

In preparation for the relaunch of their Las Vegas residency, ‘Fatale Originale’, FOJC has teamed up with producer Chris Moon (known for discovering Prince). This is set to open in 2022, but that is not all they are planning this year. You may have heard their music and not even realized it, as it has been featured on television shows and more. And this is just the beginning for them, as they are also getting ready to release a brand new EP this Spring!

Va Va Voom to the Moon will be available everywhere music is available on April 15th. Be sure to follow Fans of Jimmy Century on socials, and keep up with all their upcoming music, shows, videos, etc, on their website!