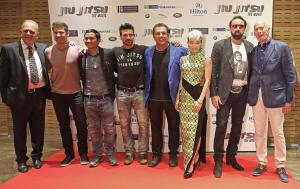 Lawsuit was filed on 05/04/2022 against CIPA and The Republic of Cyprus in Nicosia District Court by Advocate Constantinos Messios for 14,775,000 EU in damages.

“It’s an undisputed fact that we were awarded a 35% Cyprus Film Cash Rebate against our spend, by Cyprus Invest, which induced us, as producers, as well as our investors to make the film in Cyprus. We spent millions and millions of Euros in the Republic of Cyprus producing the film. We were told to hire KPMG, Cyprus, one of the largest accounting firms in the world, to audit our Cyprus production spend. KPMG turned in their Audit to Cyprus Invest, which audit was approved, and to this day Cyprus refuses to pay their approved obligation to our investors;” Says producer Martin Barab.

In 2018, Cyprus Invest (CIPA) sent invitations to hundreds of producers from around the world, and paid to fly and host these producers in the island of Cyprus, to introduce them to their new film 35% Film Cash Rebate program, so Cyprus could entice the producers to bring their production money and spend it in Cyprus.

The lawsuit claims, “In particular, a presentation was made and / or claims were made by the then President of the Cyprus Invest, Eleftherios Eleftheriou”.

It is noted in the lawsuit, ” that previously for the period until 30/6/2019 and / or after an exchange of very detailed information and / or contacts between KPMG and PWC it was notified to the Plaintiff and at the same time to all members of the EEC and to the Director General of the Ministry of Finance Mr. George Panteli as the Competent Authority that the approved expenses were € 14,610,385, the proportional return measure was € 5,113,634.70 while the tax on withholding taxes was € 1,318,387.00″.

Jiu Jitsu turned out to be a success all over the world. The first week of its US opening during the pandemic it was number six on Apple TV, number four on Netflix, and number one on Netflix in Canada. Jiu Jitsu surpassed movies like the Gift with Kate Blanchett, Godzilla: King of the Monsters, and the Greek Book, of director Peter Farrelly.

With this and additional lawsuits forthcoming the dream of the Republic of Cyprus becoming a major film production destination has turned sour.