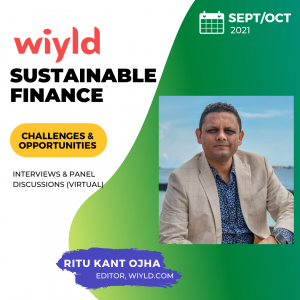 Wiyld would host global thought leaders in the sustainability space

Wiyld is a global digital media platform with a primary focus on sustainability, green-innovation and renewable energy.

There is a paradigm shift being witnessed in terms of how we think about finance and investment. Thought leaders will discuss and deliberate on global trends in sustainable finance on Wiyld platform.”
— Ritu Kant Ojha

DUBAI, UAE, September 5, 2021 /EINPresswire.com/ — With less than 2 months to go before the much awaited 26th United Nations Climate Change Conference, also known as COP26, starts in Glasgow, the global sustainability news platform, Wiyld, has announced a series of virtual events focussed on sustainable finance. Ritu Kant Ojha, founder and editor of Wiyld will moderate the discussions.

“There is a paradigm shift being witnessed in terms of how we think about finance and investment. While the world recovers from COVID-19, the policy-makers, thought leaders and change-makers are discussing how to retain sustainability at the heart of economic recovery plans. The need for rebuilding of global economies in more sustainable, resilient and equitable ways has never been felt so intensely as it is now. Right from the need for international convergence on taxonomy, data standards and metrics to the opportunities it presents for various industries and the man on the street, Wiyld would try and break the complex topic of sustainable finance in a meaningful and easy to understand discussions aimed at bringing-in wider participation of stakeholders,” said Ritu Kant speaking to journalists.

Finance is essential to accelerating the transition to net-zero and achieving the full ambition of the Paris Agreement and would be a key focus of discussion in Wiyld discussion series. “Over the past year, the public and private sectors have been working hard to put the plumbing in place to ensure that every financial decision takes climate change into account. In the final 6 months to COP26, we must build on that foundation through commitments to net zero from the world’s major private financial institutions and with new markets that help meet the needs of the developing world,” Mark Carney, former Bank of England governor and finance advisor to UK Prime Minister, Boris Johnson was earlier quoted in media.

Majority of the debate on sustainable finance has been limited to a small set of stakeholders and a niche audience. Wiyld plans to invite speakers who would talk about a range of topics: the capital flows to activities that support the transition to a low-carbon, climate-resilient and sustainable economy, greenflation, how organisations can adopt the best sustainability reporting practices, the financial instruments required to achieve the sustainable growth objectives, new opportunities for the professionals and startups in the sustainability space, opportunities that opened-up after the EU Green Deal was announced, and how investments focussed on sustainable businesses can be unlocked.

“Climate-change is here and now. And it will only worsen and is going to be devastating. To see a change, we need collaborative efforts not only of a few thousands in the entire world, but millions of people in every country. Wiyld being a global platform focussed on sustainable finance, green innovation, renewable energy, e-mobility and clean tech, we want to actively collaborate and contribute to the debate around sustainability,” Ritu Kant said, stressing the urgency.

Before setting-up wiyld.com, Ritu Kant worked with CNBC TV18, Bloomberg, Star Group and The Indian Express and consulted 100 plus CXOs globally across finance services, infrastructure, smart cities, ecommerce and lifestyle. “When I started my journalism career two decades back, you rarely met any companies seriously talking about climate change or steps taken towards net-zero. Sustainability was part of post-lunch fancy discussions in seminars and CSR initiatives that were not much beyond photo-op. But times have changed. Lives are being lost every few days due to natural calamities that are ever increasing, and even rich nations cannot fight it alone. Companies have woken-up to the new reality and there is a visible change. However, there is an immediate need of a much wider involvement of those passionate to contribute to the cause of sustainability and green innovation, and Wiyld aims to provide a platform to drive that change,” said Ritu Kant.

COP26 is the annual UN climate change conference being held this year. COP stands for Conference of the Parties, and the summit will be attended by the countries that signed the United Nations Framework Convention on Climate Change – a treaty that came into force in 1994. It is scheduled to be held in the city of Glasgow, Scotland between 1 and 12 November 2021, under the presidency of the United Kingdom. A focus for the negotiations is finalising the rules needed to implement the Paris Agreement, called the ‘Paris Rulebook.’

The Paris Agreement was agreed at COP21 in 2015. For the first time ever it saw almost every country around the world enter into a legally binding commitment to reduce emissions. It was ‘top down’ in that every country – no matter how big or small – signed up to cutting carbon emissions to limit global warming to well below 2 degrees and ideally to 1.5 degrees above pre industrial levels; and it was ‘bottom up’ in that it left room for each individual country to decide how they would get there. These were called Nationally Determined Contributions (NDCs). The Paris Agreement also set out ambitious goals on adaptation and on finance, recognising that many people around the world are already experiencing the impacts of a changing climate, and that support – financial, technical and capacity building – would be needed.

“The COVID-19 pandemic has brought devastation to millions around the world, disrupting many parts of the global economy. Governments, including our own, have stepped up to protect lives and livelihoods. But climate change has continued, and it ultimately threatens life on earth. COP26 needs to be decisive. Whether future generations look back at this time with admiration or despair, depends entirely on our ability to seize this moment. Let’s seize it together,” Alok Sharma, COP, President-designate said in the COP26 report.