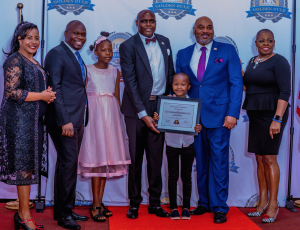 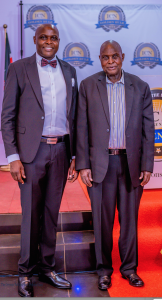 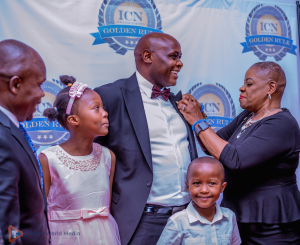 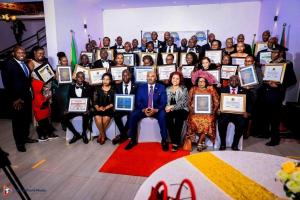 A group photo of ICN awardees and officials, with Dr. Walter Okibo at the back (in bow tie). Dr. Walter Okebo during a blood donation on Valentines Day 2022 at Kisii Blood Transfusion Centre. With him from left to right is Edinah Kangwana, Magdaline Gesare, Sarah Omache

I believe every life is valuable and is created to bring a contribution to the world.”
— Sir. Dr. Clyde Rivers

NAIROBI CITY, GREENSPAN, KENYA, March 6, 2022 /EINPresswire.com/ — When Dr. Walter Okibo Bichaga’s name was announced through the public address system, the attendees of the awarding ceremony thunderously clapped. Women ululated while men whistled as Dr. Bichaga rose from his seat and strode to the podium to receive the Global Ichange Nations™ Distinguished Leadership Award. The excitement and joy that punctuated the hall at Karmel Park Hotel that evening of February 26th, was an indicator that Dr. Bichaga well deserved the award.

Dr. Walter Okibo wears many huts, has touched many hearts and is many things to many people. In general, Dr. Okibo is a dynamic policy maker and a visionary and transformative leader with extensive leadership experience in Public Service, Academia and Industry. His impactful contribution to society reverberates in Western Kenya where he was born and transcends to other parts of the country.

He is a community development champion, counselor, youth and gender advocate, and a certified mediator, keen on initiating and supporting sustainable solutions. Dr. Okibo’s messages of hope tower in the hearts of the people he addresses each time such an opportunity comes his way.

Dr. Okibo is currently serving as Kisii County Minister in charge of Lands, Physical Planning and Urban Development. He also doubles up as the Ministry of Trade, Tourism and Industry in acting capacity.

Previously, he served as Minister of Roads, Public Works, Infrastructure, Transport and Housing. He also served in the Administration, Corporate Services and Stakeholder Management docket in the same devolved government.

Dr. Okibo was tapped from the world of academia where he equally left imprints that are evident to this day. At the time of joining the county government, Dr. Okibo had left Jomo Kenyatta University of Agriculture and Technology (JKUAT) where he was a Senior Lecturer in the School of Business and Entrepreneurship.

Dr. Okibo is an ardent community issues champion, a calling he takes with the seriousness that is synonymous with him whenever he focuses on a mission. This is despite the fact that his main job at the county government places him at the central point as relates to the day to day operations there-in.

He has adopted two local schools for mentorship under the Role Modeling Initiative. The two schools are within the borders of Kisii, whence such mentorship programs are alien yet they make a meaningful impact on the current school going children. The mentorship initiative, Dr. Okibo says, is aimed at making the learners identify their dreams and pursue them with sheer focus and determination for an eventful future.

He is a gender mainstreaming champion where he calls for inclusivity and diversity. He believes that for a future empowered world we all envision, we need to have the needs of both the boys and the girls on board. He therefore, advocates for the boy child to join in the gender mainstreaming journey. This is in a bid to cushion the boys from future unforeseen challenges if they are left behind.

Dr. Walter Okibo supports many vulnerable students to achieve their education by paying their school fees. He is a founding member of the Roundtable Wellness Club based in Kisii through which he addresses mental issues, especially those that emerge due to the impacts of Covid-19. The club was formed following the high number of suicide cases that were recorded in Ki sii particularly since 2019.

He is also a founding member of Community Action for Development, a community based organization based in Kisii. Through this, he is able to holistically address community emerging issues around education, health, drug abuse, climate change, mental health and civic education.

Recently, Dr. okibo was among the initiators if a blood donation drive to mark the 2022 Valentine’s Day at Kisii Blood Transfusion Centre as a sign of sharing love unconditionally to those who need blood. He believes that voluntary donation of blood can save lives of critically ill patients and urges residents to embrace it.

Dr. Okibo serves in several boards among them the Institute of Chartered Mediators and Conciliators of East Africa, Kisii County Land Transaction Committee, Kisii Municipal Board and Strategic Management and Entrepreneurship Society of Kenya.

He is a certified mediator and a Presidential Awardee of the Moran of the Order of the Burning Spear (MBS) for exemplary performance in the public sector and contribution to community development.

Dr. Walter Okibo has immensely contributed to the field of research with over 150 peer reviewed publications. He is a sought after public speaker and contributes to topical issues both on local and National platforms.

The ICN delegation was led by its Special Envoy, Dr. Ruben West who said that Dr. Okibo is one of such great individuals whose contribution to society ought to be recognized and honored.

IChange Nations is a Culture of Honor System; the organization is committed to bringing back the lost art of honor by building a Culture of Honor that recognizes individuals throughout the world who have exemplified extraordinary humanitarian efforts to effectively change nations.

Dr. Walter Okibo is now in the company of several influential male world leaders that the iChange Nations™ organization has awarded.

Those leaders include but are not limited to:

President Yoweri Museveni, of Uganda: Honored for his great leadership in establishing and maintaining peace in his country.

Former Vice President of Kenya, Kalonzo Musyoka: Honored for his efforts in the peace making process for Kenya, Sudan and Burundi.

Former President Pierre Nkurunziza, of Republic of Burundi: Honored for his efforts to bring peace to a 12-year civil war between the two major tribes in his country.

Former President Olusegun Obasanjo, of Nigeria: Honored for the Anticorruption policies he implemented in Nigeria.

Former President Wolde Giorgis, of Ethiopia: Honored for his efforts to build a better environment in his country.

Dr. Kenneth David Kaunda – Former President of Zambia: Honored for his life’s work to establish peace in Zambia and on the continent of Africa.