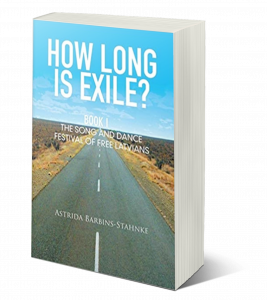 First Book of an Epic Trilogy — Standout Author pens a well-written memoir
centered on the Latvian people who suffered in and around World War II.

TUCSON, ARIZONA, UNITED STATES, February 3, 2022 /EINPresswire.com/ — Remarkable author Astrida Barbins-Stahnke’s meditative and reflective life-based
fiction, How Long Is Exile?: Book I: the Song and Dance Festival of Free Latvians probes deeply
into the main character’s psyche and also of other characters who travel the journey with her. Let
us discover the lasting impact of war and how it branches out and goes on onto the third and fourth
generations through the main character, Milda’s thoughts and actions.

How Long Is Exile?: Book 1: The Song and Dance Festival of Free Latvians, with its flashbacks,
introspections, nostalgic memories, and melancholy takes place at the festival with Milda, the main
character, coming to the song festival to find a newer and freer self after years of mourning for her
deceased husband Kārlis Arājs. In wistful flashbacks, Milda recalls her childhood before and after
World War II, her years as a refugee in Germany, the nurturing of her husband and children in Ilga
and Gatis in a quickly changing and confusing United States during the 1960s and ‘70s. The
gradual opening of her homeland and the possible reunification with her sister Zelda, who had
survived five long years in a Siberian gulag, caused her further frustrations and guilt.

Astrida Barbins-Stahnke was born on March 15, 1935, in Priekule, Latvia, to Reverend Juris and
Milda Barbins, the fourth of six children. Her father was minister of the Priekule Baptist Church,
which he served for thirteen years. In 1939, needing more land for his growing family, he moved
them to a fourteen-hectare farmland called Mazgramzda, which, after a land reform act, had been
divided off a Baltic German’s property. The transition from town to country was difficult,
especially for their Liepaja born and Riga University-educated mother, whom Astrida greatly
admired. Except for her father, her family missed their grand home in Priekule and the cultural
life even of a small town.

There is no need to continue with the biographical sketch as the general course of their family and
the people of their country is outlined in this novel. And this is a novel, not a memoir. The time
and settings are quite accurate, but the characters and events are fiction, though rooted in real
historical events, people, and impressions as viewed and experienced through the lives of each
character. Any resemblance to real people and situations as described are coincidental.

How Long Is Exile?: Book I: the Song and Dance Festival of Free Latvians
Written by: Astrida Barbins-Stahnke
KIndle |
Hardcover |
Paperback |

Authors Press is an online publishing company and book reseller catering to the needs of both
experienced and aspiring authors as well as readers. They offer the best publishing solutions for
full-time and independent authors. The company’s team of proofreaders, editors, designers, and
publishing professionals are committed to achieving industry standards for their client’s work to
be published, marketed, and sold.