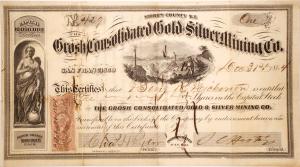 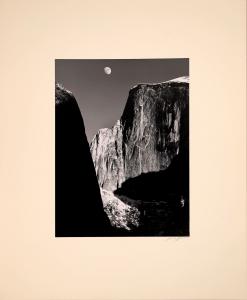 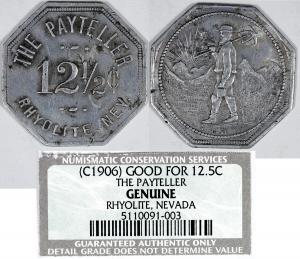 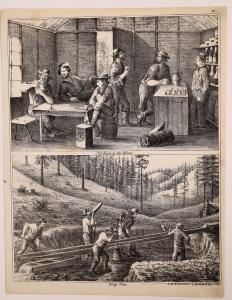 Britton & Rey lithograph depicting life scenes of gold miners in the 19th century, titled Bar Room in the Mines and Long Tom, one of only five known copies (estimate: $ 1,000-$2,000). 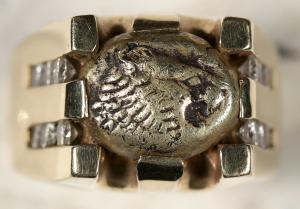 Offered will be items in many categories and at price points that will appeal to both novices and veteran collectors alike. Important collections will be sold.

RENO, NV, UNITED STATES, December 7, 2021 /EINPresswire.com/ — Holabird Western Americana Collections, LLC is famous for its five-day auctions featuring thousands of highly collectible items in a rainbow of categories, but the firm will end 2021 with a tidy, three-day affair, December 17th-19th, online and in the Reno gallery, boasting over 1,900 lots of rare books, art, mining, numismatics, stock certificates, postcards and more.

The December Dreams: Premier Americana Auction will begin at 8 am Pacific time all three days. Highlighted collections include more parts of the Ken Prag postcard collection, the Bill McIver token and medal collection, the MacKenzie Montana collection and the Ron Lerch Western collection. These will be supplemented by world-class rarities from other collections.

Day 1 will contain over 600 lots of philatelic (stamps); military, political and firearms; gaming collectibles; and model railroad and toys. Postcards, many of them from the Ken Prag collection, will include California (especially wine country), Hawaii, Disney, Titanic and Pioneer examples.
The gaming section includes items from the Shirley Bovis Cowboy Museum in Tombstone, Ariz.

Of the 500 postcard lots from the Ken Prag collection, about 350 lots are California-related, but 40 lots or so are Hawaii-themed. Lot 1361 – nearly 80 early Hawaii and South Seas Curio Co. postcards, including cards from the Aloha Nui series – has an estimate of $300-$600; while lot 1447, a group of ten Titanic-related postcards from around the time of the tragedy, should realize $700-$1,500.

A highlight of items from the Shirley Bovis Cowboy Museum is lot 1552, a circa 1880-1890s well-used holster that appears to have been made for a medium-framed revolver with a Buntline length barrel (estimate: $800-$1,600). No maker’s mark is visible, and it would be difficult to place ownership of the rare holster, but good guesses are lawmen Wyatt Earp and Bat Masterson.

Tops in the firearms category is lot 1551: a model 1888 Gewehr 88 rifle (aka a commission rifle) made at the Amberg, Germany arsenal in 1891, in very good condition with bluing on the barrel sleeve and magazine well (estimate: $800-$1,000). A must-have for original European weapons collectors, the rifle has a Mauser-inspired design but the Mauser arsenal didn’t design this model.

Day 2, December 18, has 683 lots of books (featuring Part 1 of the Ron Leach Western directory collection; mining artifacts and ephemera; and stock certificates and bonds, to include mining and railroad. There are about 200 directories from this first installment of the Ron Lerch collection. Directories are considered a “primary source” material and, as such, are essential aspects of historical research.

Two key pieces from the Lerch collection are the Wells Fargo & Co. Express Directory of Chinese Houses (all in California) from 1878, one of the most sought-after of all the Western directories; and a Montana Territory History & Business Directory from 1879, when Montana was not yet a state, 218 pages, with original fold-out map. Both have estimates of $3,000-$6,000.

Other Day 2 highlights include a handbill issued by Wells Fargo in 1866, extolling the thefts of company monies used by several agents to gamble on mining stocks (estimate: $2,000-$4,000); and a Britton & Rey lithograph depicting life scenes of gold miners in the 19th century, titled Bar Room in the Mines and Long Tom, one of only five known copies (estimate: $ 1,000-$2,000).

From the Joe Elcano mining stock collection is a certificate for the Grosh Consolidated Gold & Silver Mining Company (Virginia City, Nev.), for one share, issued to Benjamin Nickerson, issued on Dec. 31, 1864, signed by the company president and secretary, showing two vignettes: a bare-chested allegorical woman and a gold prospector on the move (estimate: $1,200-$2,000). The certificate is important because the company was a scam market play on the original Comstock discoverers, the Grosh Brothers.

Day 2 lots 2455-2514 are Nevada mining stocks; the majority are from the massive Elcano collection. This is the first one of multiple sales that will feature the Elcano Nevada mining stock collection. The entire Day 2 mining section is strong, though, and features some really great California Gold Rush material (to include letter-sheets), a huge Colorado section, and Montana and Nevada.

As always, there will be a strong Native American section, featuring baskets (with more to come in the next sale), jewelry and art. Artwork will include three early Salvador Dali signed lithographic prints and a wonderful group of Japanese woodblocks and prints, many signed.

Antiquarian photography is a key category for collectors. Day 3 will feature historic and possibly unique Western stereo-view cards and photographs, led by a fabulous Ansel Adams original photograph group from his Yosemite Series (all signed), including Moon and Half Dome (1960), print No. 10, considered one of Mr. Adams’s greatest photographs (estimate: $10,000-$20,000).

Offerings from the Bill McIver Nevada token and medal collection are not to be missed. They include the centerpiece of his collection: possibly the finest known 12.5-cent token from The Payteller (Rhyolite, Nev.), showing a bearded miner with a pick, shovel and lunch bucket, plus a mountain and rising sun (estimate: $7,000-$10,000), octagonal in shape and 30mm in width.

The MacKenzie Montana collection continues with historical documents and ephemera. A spectacular and large artisan pot by Montana artist Randall Blaze (b. 1949), 17 inches tall, is expected to bring $4,000-$8,000. The pot is from an exhibition titled Shields by Randall Blaze, Oct. 16-Dec. 11, 1988, at the Museum of the Plains Indian and Craft Center in Browning, Mont.

A great numismatic rarity is found in a letter of 1851. Prior to the establishment of a Branch US Mint in California, private firms made their own gold coins. Some came under fire in 1851 for not containing sufficient gold. These firms, including Dunbar & Co., were “attacked” in the local press, which adversely affected their value. Directly reacting to this adversity, a letter here addresses how Dunbar would cure and defect. It is the first original document found to date to discuss this important period.

A numismatic treasure is lot 3389: a 6th century BC ring of one troy ounce of solid 14kt gold, carefully holding a 1/3 stater gold piece with a lion motif (estimate: $7,000-$8,500). The ring has 12 diamonds, six on either side in rows of two, with a combined weight of 0.84ct. It is one of the world’s first gold coins, is in great XF+ condition and comes with a certificate of authenticity.

Online bidding via iCollector.com, LiveAuctioneers.com, Invaluable.com and Auctionzip.com.
The full catalog can be viewed online now, at www.holabirdamericana.com. For those planning to attend the auction in person, regulations and protocols regarding COVID-19 will be enforced.

Color catalogs are available by calling 1-844-492-2766, or 775-851-1859. Also, anyone owning a collection that might fit into an upcoming Holabird Western Americana Collections auction is encouraged to get in touch. The firm travels extensively throughout the U.S., to see and pick up collections. The company has agents all over America and will travel to inspect most collections.

Holabird Western Americana Collections, LLC is always seeking new and major collections to bring to market. It prides itself as being a major source for selling Americana at the best prices obtainable, having sold more than any other similar company in the past decade alone. The firm will have its entire sales database online soon, at no cost – nearly 200,000 lots sold since 2014.

To consign a single piece or a collection, you may call Fred Holabird at 775-851-1859 or 844-492-2766; or, you can send an e-mail to fredholabird@gmail.com. To learn more about Holabird Western Americana Collections, LLC and the December Dreams: Premier Americana scheduled for December 17th through 19th, please visit www.holabirdamericana.com. Updates posted often.