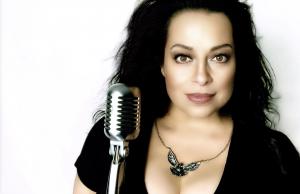 Niece of rockabilly legend Jack Scott, Scafone’s a significant swinger who serenades with sizzle and song.

In a year where a global pandemic seemingly exiled live music, it’s a powerful prize to be rewarded for work created in isolation. But when music transcends the moment, it can be magical merriment.

Blessed with an exquisite range of rhythm, Rio Scafone has finally arrived.

Nominated for five Josie Awards by the world’s largest independent award show, Rio Scafone’s recognitions include Rock Song Of The Year for her most recent single, Fire and Brimstone, and as a solo artist: Rock Vocalist Of The Year, Rock Artist of the Year, Entertainer Of The Year, plus a Band Of The Year nomination for Rio and the Rockabilly Revival who celebrate ten years together in August 2021.

Impressively, Rio Scafone’s recognitions were selected from a considerable list of 42,000 submissions.

In both her solo work and as the frontwoman for her multi-award-winning tour band Rio and the Rockabilly Revival, this group of superb swingers performs a bombastic stage show that draws music lovers of all ages and backgrounds. Their sizzling style combines most elements of Americana music, including rockabilly, psychobilly, punk, swing, country, honky-tonk, blues, surf rock, and rock ‘n’ roll. They bring a fun, high-energy show guaranteed to get crowds dancing, drinking, and having a great time.

Niece of rockabilly legend Jack Scott, Scafone’s a living argument in favor of the idea that rock ‘n’ roll is in the genes. Brimming with sensuality and a fiery focus, this mother, actress, and significant singer cuts a striking statement.

Canadian Songwriters Hall of Fame singer and legendary rockabilly cognoscenti Jack Scott was a reluctant star whose mellow balladry competed with Elvis Presley and Roy Orbison in the pop charts. He straddled a narrow fence between rock-and-roll and pop, placing 19 songs in the Billboard charts between 1958 and 1961. In later decades, Mr. Scott’s swaggering “The Way I Walk,” with its power chords and nonsensical scat refrain, became a rockabilly anthem through cover versions by Robert Gordon and the punk band The Cramps.

RIO SCAFONE is an American recording artist and actress from Detroit. As the niece of Rockabilly pioneer Jack Scott, she was steeped in the spitfire sounds of that early rock and roll from an early age, and taken under her uncle’s famous musical wing, she learned from the best and forged her voice. Today, that retro feel still swims in her veins, but with a voice as big as the sky, she brings a very modern twist blending the old with the new for a sound uniquely her own. Rio Scafone’s a living argument in favor of the idea that rock ‘n’ roll is in the genes. In some ways, at least on a cursory glance, Scafone’s conventional, but the tie to music is impossible not to recognize. As early as age five, she could be heard singing Jack Scott and Johnny Cash songs out her bedroom window in the middle of the night to her first loyal fan, Rebel, the neighbor’s German Shepherd who would faithfully listen from below each night. Her first Rockabilly album was released decades later with her band Rio and the Rockabilly Revival aptly named, The Midnight Rebel Sessions. As a professional actress and a touring recording artist, she appeared n Detroit 187, HBO’s HUNG, Hallmark, to name but a few.