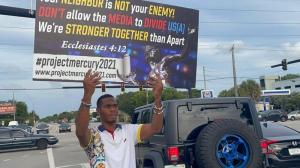 Project Mercury’s message – ‘We are stronger together than apart.’

SAVANNAH, GA., USA, September 1, 2021 /EINPresswire.com/ — Chrisrichard JeanBaptiste, a first-generation American whose parents migrated from Haiti, is trying to build back the divided house that America has become. He has launched Project Mercury 2021 to spread the message that we are much stronger together than apart.

JeanBaptiste was brought to America in 1987 by his parents, Isidor and Esther, to escape Haiti’s poverty, division and destruction. They chose the U.S. because of what it stood for and what it represents. JeanBaptiste describes them as a great example of unity in his life.

“America, for them, represented opportunity and progress and, as long as you put in the effort, you can carve a slice of that for yourself and give your children a better life. I love America. This country has been amazing for my life and the children I am raising today,” JeanBaptiste said.

His father taught him to be confident and to speak up for injustice. Although his father has passed, JeanBaptiste still sees him as a symbol of courage and still strives to make him proud. His mother taught him to have compassion for his fellow man. She taught him what it means to love.

JeanBaptiste is now a husband and father of three and the Creative Director of Project Mercury 2021. And what he sees in America is poverty, division and destruction.

JeanBaptiste said, “Unfortunately, this America my parents came to is becoming evermore divided, evermore a place that those opportunities that were once envied by the world are discarded for nonsensical bickering.”

So, he is building a house and that house is America.

Project Mercury 2021 is a grassroots movement spreading across the United States to unite its citizens and push forward for a brighter, better future.
JeanBaptiste knows America’s house needs a lot of work. It needs to be rebuilt. He is looking for the best electricians, plumbers and carpenters to help.

Their message is clear. “Your neighbor is not your enemy. Don’t allow the media to divide the U.S. We’re stronger together than apart.”