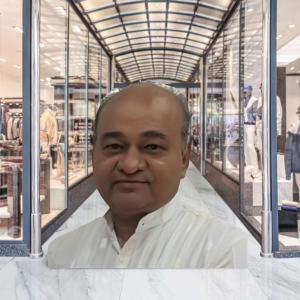 Our aim is to ensure that even men are a part of this movement so that a just society can be created where men and women can be equal partners as well as enablers.”
— Ramesh Chaurasia

NASHIK, MAHARASTRA, INDIA, April 21, 2022 /EINPresswire.com/ — The last few days in our country have been dedicated to Mother Goddess and to worshipping her energy in form of little girls. Ramesh Chaurasia has been spearheading the rise of women from Chaurasia community. He shared his enthusiasm and his vision with us in order to spread the message far and wide. He said, “We all associate Mother Goddess with creative energy, nurturing energy, as well as destructive energy. It has been an inherent part of our culture and tradition to see the same magnificence of nature in women. Somehow, over time many traditions and messages get lost. Although with changing times women have become vocal and more assertive about their place in families, societies, and nations, there is a lack of same visible assertiveness in women from rural areas. Many women from Chaurasia community belong to rural communities and marginalised sections. We want to reach out to them as much as the city women.”

Mr. Ramesh Chaurasia is the President of Akhil Bharatiya Adarsh Chaurasia Mahasabha. This organisation has a women’s wing which is doing a phenomenal job at connecting the women of Chaurasia community. They have many programs and initiatives that are aimed specifically at empowering the women from rural and marginalised sections. The wing organises functions where women come together, they also encourage people to take care of parents and preserve family structure, and they also organise educational seminars.

Bringing the invisible issues to light and making the ‘women force’ visible
The women’s wing of Akhil Bharatiya Adarsh Chaurasia Mahasabha has gone to great lengths to understand the issues that specifically plague women from rural and marginalised sections. A senior member of the wing shared her observations and views. She said, “In the last few decades, there have been many movements throughout the world to end gender discrimination. It has only benefitted the progress of human race. India has been the land where women have always been treated with respect and love. This reflects in practices of almost all religions that are followed in our country. But the cultural practices have somehow gotten separated from the daily practices and behaviour. You will be surprised to know that women from vulnerable sections don’t even realise the many facets of gender discrimination. Some facets are visible to them while others are invisible and it seems they have accepted it as the ‘normal’. Our organization under the leadership of Ramesh Lakhulal Chaurasia wants to make women understand the partial treatment being meted out to them. It is only by taking this first step that we can start a healthy dialogue and implement strategies meant to empower women. What is important is that there are no enemies or adversaries. Everyone suffers ultimately if one section is not included or treated badly while we try to progress on all levels. Our aim is to ensure that even men are a part of this movement so that a just society can be created where men and women can be equal partners as well as enablers.”

Tackling things on ground
Akhil Bharatiya Adarsh Chaurasia Mahasabha under the leadership of Mr. Ramesh Chaurasia is actually working on ground with people and for the people of Chaurasia community. When it comes to empowering women, they are working on tackling every major and minor issue ranging from violence, women safety, gender based wage gap, empowering women farmers, taking care of all informal workers, women and child health, education, etc. The focus on forming region based community groups, encouraging small scale cottage industries, and other initiatives are now showing results. According to Mr Ramesh Chaurasia, this is going to be an incentive for the women’s wing to work even harder.