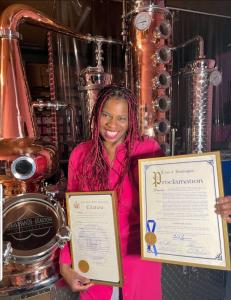 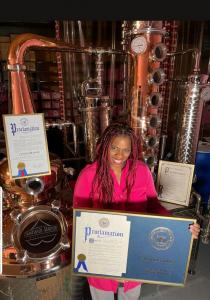 WHEATLEY HEIGHTS, NEW YORK, UNITED STATES, May 15, 2022 /EINPresswire.com/ — Vanessa Braxton, the first African American female Master Distiller and Master Blender in the country, has received five proclamations from the New York State government. She received one from Suffolk County Executive in 2015, another one from NY State Assembly Citation in 2016, another one from the NY State Legislature, 16th District in 2018, and two from the town of Huntington in 2018.

Vanessa’s brand, Black Momma Vodka, launched in 2013 on the west coast with a co-distillery. In 2015, she perfected the art of distilling and blending training under the guidance of Dr. Sonat Birnecker Hart, co-owner and President of Koval Distillery, one of the largest independent and woman-owned craft distilleries in the nation. She was also trained by Dr. Robert Birnecker, an Austrian native and third-generation distiller who is the CEO and Master Distiller of Koval Distillery in Chicago. He is one of the top distilling experts and internationally renowned consultants.

After moving back in 2016, Vanessa opened her own company in Wyandanch, New York called Gravesande Braxton Distillers which is 100% Black-owned. In fact, she is the only Black woman in the country who 100% owns her own distillery, manufacturing facility, and a 15-acre farm grow house.

During the pandemic in 2020, Vanessa pivoted to making hand sanitizers for the Department of Homeland Security and also hospitals nationwide. This helped expand her distillery with bottling automation equipment and scale with the release of future products. Her distillery is now distilling Gin, Liquors, Vermouth and is planning to release American Single Malt Whiskey 100% Barley in the near future.

In addition, her distillery also provides private labeling, contract distilling, blending, and bottling for those looking to procure their own craft spirit brand

Learn more about Vanessa Braxton and Black Momma Vodka at the company’s official website at BlackMommaVodka.com