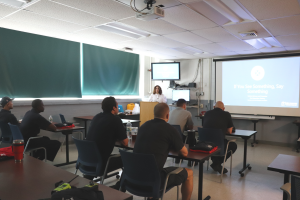 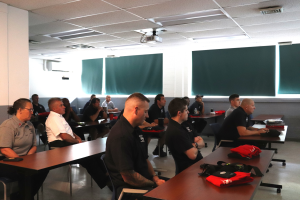 US & UK, August 2, 2021 /EINPresswire.com/ — The Gelt Charitable Foundation began the intense process to train Boston’s 1,500 firefighters in suicide prevention awareness. The Gelt Charitable Foundation, sponsored by Gelt Financial, is a leader in suicide prevention education, and has made first responder mental health awareness an issue of absolute priority. Throughout the Covid-19 pandemic They have conducted workshops all over the world, including South Africa, Canada, Israel, and the U.S.

Most recently, they trained law enforcement in Sarasota, Florida, another sect of first responders struggling with a very real suicide epidemic. When the Gelt Charitable Foundation, a non-profit sponsored by Gelt Financial, first embarked on their mission to make suicide awareness training accessible, they knew there was an urgent need for training focused on first responders. According to the National Fire Protection Association, in 2019, 119 firefighters lost their lives to suicide, compared to the 48 who were killed on the line of duty. “We couldn’t stand by, knowing our country’s heroes were silently suffering,” Jack Miller, the founder at the Gelt Charitable Foundation, said, “and we knew we had the tools and the desire to be a part of the solution.”

Lieutenant Charles Popp has 35 years at the fire department under his belt. Motivated by what he saw and learned on the job, he is also a licensed clinician that specializes in working with first responders. “Firefighters do not typically present with the usual symptoms [of suicidal ideation], and despite strong efforts to reduce stigma, there is still a strong reluctance for the helpers to ask for help,” Popp said. Firefighters are often the last people to be expected to take their own life, and that misconception holds even among their peers.

The Gelt Charitable Foundation has teamed up with the Boston Fire Department for this undertaking, the first of its kind for the fire department. They will be conducting 72 workshops over a month and a half. The workshop is titled “If you See Something, Say Something”. This is a specialized and tailored version of the most popular Gelt Charitable Foundation workshop. This version has been created specifically for first responders, and particularly focuses on their unique needs and values. The workshop goes deep into the warning signs of suicidal ideation, and more importantly, how to respond to those signs. “We’re here to demystify and destigmatize this conversation,” shared Leigh Ioffe, the director of education at the Gelt Charitable Foundation, “Firefighters have seen everything, and we are here to ensure they know what to do with it all.”

The Gelt Charitable Foundation provides affordable and accessible world-class suicide prevention and mental wellness education. For more information regarding this event, contact Ella at esteinmetz@geltcharitable.foundation. To learn more about bringing one of their workshops to your business or community, visit geltcharitable.foundation/mentalhealth.

The Gelt Charitable Foundation is funded by Gelt Financial: https://geltfinancial.com/