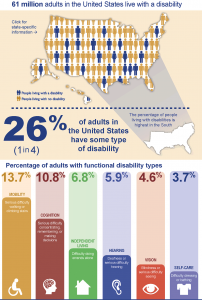 10.8% of adults in America have serious difficulty concentrating, remembering, or making decisions

Dismissed charges against Lawrence Rufrano highlight need for better understanding and record keeping of cognitive disabilities in the workplace and government.

Lawrence’s ordeal makes clear the need to address neurodiversity in our workplaces and government. A disability is not a crime.”
— Dr. Anthony Chapman, psychiatrist

In 2015 at age 61, after repeated failures to submit paperwork on time, Mr. Rufrano was diagnosed with Executive Functioning Disorder (EFD), which is linked with cognitive disabilities such as Attention Deficit/Hyperactivity Disorder (ADHD) and impairs short term memory and ability to plan, organize and complete tasks. The Fed decided this aging-related impairment required early retirement and long-term disability.

“Objective, widely accepted testing administered by a Johns Hopkins trained neuropsychologist showed that Lawrence’s executive functioning is in the bottom three precent of the population,” said Dr. Anthony Chapman, Mr. Rufrano’s psychiatrist for 10 years. The crux of his disability is a tremendous discrepancy compared to his other cognitive abilities. Lawrence has a brilliant facility with macro ideas, but he is disabled in the small things like not opening his mail, or understanding detailed written instructions. Basically he got fired from the Federal Reserve because he didn’t turn in his expense account reports on time.”

According to the Centers for Disease Control and Prevention (CDC) over 16 million Americans are living with a cognitive impairment, the second most common disability after mobility, and is the fastest growing disability as school-age testing becomes standard and the baby boomers age.

“Anybody with half a brain wouldn’t have brought a case against him in the first place,” said Dr. Chapman, It’s like accusing a blind person for not seeing the writing on the wall. Everyone has some mental deficiency. It’s now common practice to accommodate cognitive disabilities in our public schools and military. Lawrence’s ordeal makes clear the need to address neurodiversity in our workplaces and government. A disability is not a crime.”

Not only did the Fed have a lapse in records about his medical condition and the fact that he had repaid the Fed, each government office had to gather information from him individually. Social Security, for example, had no records of his payroll payments over the prior 10 years at the Federal Reserve. There is no national database. Mr. Rufrano’s case not only cost him hundreds of thousands of dollars to defend, it wastefully diverted many hours and dollars of government resources.

“I unsuccessfully tried for 18 months to get my payroll records to the local Social Security office,” said Mr. Rufrano. “I realized data keeping is a far bigger problem than just what I experienced. There are over 120 million Americans who are either elderly, disabled or veterans that depend upon government assistance.”

“I have an expanded mission in life, to help the government increase their technological capabilities,” said Mr Rufrano. “Many technology startups and academics have been campaigning for a new national data system not only to enable better government assistance for all Americans, but also to usher in a digital economy. Digitizing the economy can increase economic growth and efficiency.”