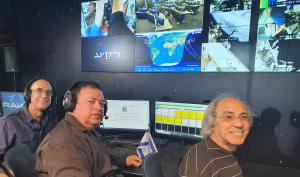 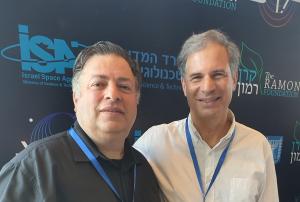 Dr. Eran Schenker (IAMI) and Eytan Stibba, Private Astronaut, before his launch to space by SpaceX Dragon part of Axiom-1 mission to the International Space Station

Space researchers hope after conducting the first Israeli biomedical research on the ISS that, that the vision will not deteriorate in short space flights

CAPE CANAVERAL, FLORIDA, USA, April 18, 2022 /EINPresswire.com/ — One of the most innovative technology evaluations this week at the International Space Station may be interesting for us here on Earth. It is a digital vision test via tablet/mobile phone that diagnoses our visual acuity without a need to go for an eye test. The visual acuity study is the first Israeli research conducted by Eytan Stibbe, private astronaut in space, as part of the Rakia space project. The study’s first phase was conducted after arriving at the International Space Station on the Dragon spacecraft. The spacecraft was launched by Elon Musk’s SpaceX Falcon 9 rocket to the international space station. The vision test was performed during the space mission several times and towards the end of the mission in space, led by three Israeli researchers, Dr. Eran Schenker, Prof. Uri Polat, and Prof. Yossi Mendel.

Prolonged exposure to microgravity conditions during space missions can impair vision; symptoms reported by astronauts who have been in space include decreased vision, changes in the optic nerve, retina, and a difference in the retina error.

The study was supervised in the earth control center in the Rakia space complex by Prof. Uri Polat, Head of the School of Optometry and Visual Sciences, Prof. Yossi Mandel, Head of the Science and Ophthalmology Engineering Laboratory at Bar-Ilan University, and Dr. Eran Schenker, medical director of the Israel Aerospace medicine Institute.

Prof. Uri Polat of Bar-Ilan University expressed: “I have to say that after a year of demanding work and endless meetings with space agencies officers, representatives of SpaceX and Axiom team to seat in the ground space mission control center, connected to the space station and waiting for a confirmation that the study has been successfully completed is very exciting.”

Prof. Yossi Mandel added, ” While monitoring the study in the ground control, an astronaut conducts the first Israeli research in the field of vision on the International Space Station, is a dream that becomes a reality and a breakthrough for many other medical studies in the future.”

For Dr. Eran Schenker, this is not the first space mission. As a space doctor, he has studied for the last 25 years a variety of biological phenomena in space. Dr. Schenker explains: “The last time vital signs and physiological parameters were taken from an Israeli in space was on the Columbia mission to the late Ilan Ramon, the first Israeli astronaut. It took more than five years before Israeli researchers were once again dispatched to the space with Israeli technology coordinated by the Israel Aerospace Medicine Institute (IAMI). IAMI was able to launch studies on all NASA space shuttles back then. With SpaceX technology and Axiom-1 mission, more than 30 studies launched to the space station and complemented by Ethan Stebba”.

“I have no doubt that the space studies in the mission will contribute greatly to understanding the visual functions in zero-gravity conditions and will greatly assist in planning long-term space missions for the moon and further to Mars,” concludes Dr. Schenker, the Israeli space doctor.