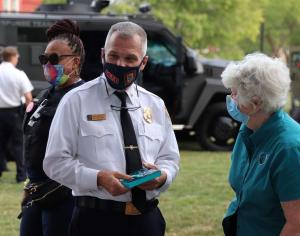 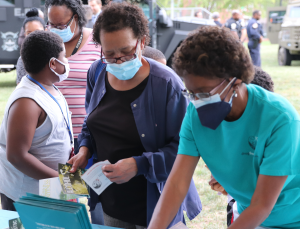 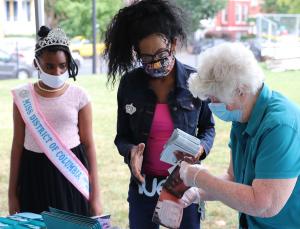 Community members, including Miss District of Columbia, take extra booklets to give to others

Dozens of outdoor events educate citizens on the dangers of various drugs and the potential for addiction.

Drugs are destroying our kids, our families and our communities. I want to help improve my community. Drug prevention education is key to having a safer community.”
— Cynthia McIver, a long time Drug-Free World volunteer from Northeast DC

WASHINGTON, DISTRICT OF COLUMBIA, UNITED STATES, August 18, 2021 /EINPresswire.com/ — Police, volunteers, and city agencies participated in National Night Out in Washington, DC, as well as Beat the Streets events to educate citizens and urge them to work with the police to lower crime. The connection of crime and drugs has long been documented and by decreasing drug use, crime rates go down.

National Night Out is a national program where police agencies create fun events for the community, aimed at increasing cooperation between the police and community. At these events dozens of tables are manned by various groups promoting issues, offering help, giving out information on the dangers of drugs, and offering help with housing needs.

This year large events at community parks with scores of open-air booths were again allowed with social distancing and masks worn by most vendors.

The Foundation for a Drug-Free World (DFW), which has been a participant in National Night Out events in all seven police districts in Washington, DC, over the years, joined in again this year to support the police in their efforts to bring vital information to the community on drug and crime prevention. The Foundation for a Drug-Free World Truth About Drugs booklets on synthetics, marijuana, painkillers, prescription drugs, cocaine, heroin and others were available with the Foundation’s volunteers helping answer questions about various drugs and how parents or grandparents could help talk about this issue with their kids.

Cynthia McIver, a long time Drug-Free World volunteer from Northeast DC, showed her support, saying, “Drugs are destroying our kids, our families and our communities. I want to help improve my community. Drug prevention education is key to having a safer community.”

Sponsored by the National Association of Town Watch in the United States, National Night Out has had a rich history since 1984. Mr. Matt Peskin established the non-profit National Association of Town Watch in 1981, working with community leaders, law enforcement agencies, and local officials to advance crime and drug prevention. In 1984, Matt Peskin’s dedication to the development, maintenance, and promotion of community watch programs led to the creation of the highly successful National Night Out, which usually takes place annually on the first Tuesday of August.

“We are indebted to Mr. Peskin for his vision to educate citizens about the mission of National Night Out: to increase public awareness of local crime, help to establish drug and violence prevention programs, create stronger partnerships between police and communities, increase neighborhood solidarity, and improve volunteer participation,” said Thalia Ghiglia of the Foundation for a Drug-Free World. “Our partnership with the Washington, DC, police department over the years has been very rewarding.”

In 2005 the Washington, DC, School Resource Unit of the DC Metropolitan Police Department formed a unique program which enabled police, non-profit organizations, and other agencies to reach deep into the DC neighborhoods to help stop crime and drug abuse. The series of events are called Beat the Streets.

Every week during the summer months as part of its Beat the Streets series of events the DC Metropolitan Police Department closes a neighborhood street and sets up nonprofit and government agency vendor tents, live music, and food for a whole afternoon. This year the Beat the Streets program has greatly expanded, holding events on three separate days each week and reaching over 30 neighborhoods.

The Foundation for a Drug-Free World has participated in the Beat the Streets and National Night Out events throughout the summer, bringing drug education to thousands of families.

The Church of Scientology supports the Foundation for a Drug-Free World’s Truth About Drugs program which is one of the world’s largest non-governmental drug education and prevention campaigns. Evidence-based studies have shown that when young people are provided with true information about drugs, usage rates drop.

Drug-Free World offers all its educational materials for free. Materials can be ordered at www.drugfreeworld.org. The Foundation for a Drug-Free World is an international organization with materials in 22 languages.