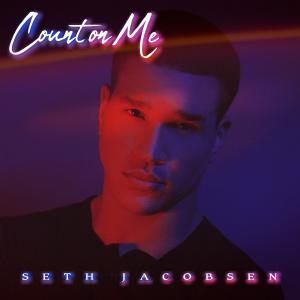 Seth Jacobsen displays extraordinary talent in his debut single, “Count on Me.”

LOS ANGELES, CA, UNITED STATES, February 18, 2022 /EINPresswire.com/ — Born in Upstate, New York, Seth Jacobsen’s debut track, “Count on Me,” is available on major platforms. Unpredictable, disciplined, and diligent, “Count on Me” reveals the dawn of a new age in music and the talent behind it. Seth Jacobsen has dedicated years to vocal, music, and songwriting training and is confident now is the time to share the fruits of his labor.

His introductory single,, “Count on Me,” will grab your attention and is a direct message to music lovers that they can count on him to deliver songs that will entice, excite, and mesmerize. Sure to get you off your feet with its infectious melodies and catchy hook, “Count on Me” was written by Seth and he produced it with Dylan Ronan. Steven Clark also mixed and mastered the track at Clear Track Studios in Clearwater, Florida. The dynamic style, feel, and lyrics pave the way for fans to witness his energetic and magnetic stage presence.

Seth began singing at the age of four and continued as the years progressed but searched for an additional musical outlet. Finally, yearning to showcase his gift to others, Seth picked up the trumpet at seven years old. Captivated and inspired by the sound and potential of the instrument, he set his sights on participating in the school band and obtaining formal music education. Most importantly, during this time, Seth discovered his uncanny ability to connect with others by placing his unique and innovative twist on melodies.

Excelling musically with the trumpet, he won all soloist competitions he entered. This experience exalted Seth’s joy of performing, and with college on the horizon, it was assumed by those in his inner circle that he would pursue a career as a trumpet soloist. However, unsure and craving something more, Seth felt his purpose would lead him on a different path. This epiphany ruminated within his heart, and during his senior year of high school, he determined if he didn’t embark on a singing career, he might regret it for the rest of his life.

Opting out of college, Seth discovered delight in the art of songwriting. The realization led him to hone his talent, prepare his stage presence, and infuse his personality, giving listeners an unprecedented glimpse of his inner thoughts through written lyrics. He believes, “Any artist can get your attention, but a true artist can keep it, and that’s what I’m going to do.”

“Count on Me” is available on major platforms.

About Seth Jacobsen
Seth Jacobsen gravitated to the genius sounds of Mozart and Bach during his early music years. He knew they understood that music could master moods and evoke feelings. His music draws inspiration from artists like Michael Jackson, Stevie Wonder, Ray Charles, Elvis Presley, and Frank Sinatra but is distinctively original. Blending his vision, training, and talent, he is dedicated and destined to bring his signature sound and energetic stage presence to the music scene. To Seth, the art of creating music is more than simply a craft. He states, “When I write music, I don’t just write for myself, I write for the listener as well. I don’t just arbitrarily express myself. Every piece will always have a set theme and direction. I’ll rewrite the whole song if I have to until it makes perfect sense.” His song, “Count on Me,” speaks sincerely to fans who can trust Seth to deliver the same quality as previous tracks, if not better. Seth states, “If you like “Count on Me,” you will love what’s next.”