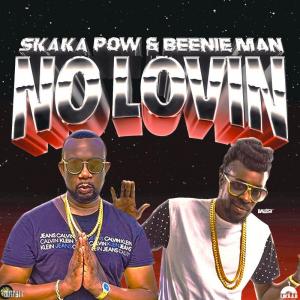 Dancehall Dr.Shaka Pow & Dr. Of Arts And King Of The Dancehall Beenie Man

MIAMI, FL, UNITED STATES, August 2, 2021 /EINPresswire.com/ — Shaka Pow Spreads International Love:
The doctors are in, and they will see you now. Coming off the global pandemic and waiting for the dancehalls to be packed to full capacity again, real medical doctor Shaka Pow teamed with Beenie Man – who has an honorary doctorate from University of the West Indies – on the summer season’s sizzling new single No Lovin.
Dr. McDonald, aka Shaka Pow, is a gynecologist and studying cosmetic surgery, as well. The big money medical profession may soon have to be only a side gig or just educational accolades for the talented Jamaican deejay, with an obvious ear for fun.

First, he’d fired up a flavorful track called Ice Cream Love, which got hung up with unresolved sample clearance issues and could not be immediately released. The ever-evolving Shaka stepped back to the mic to record his part on No Lovin and then got together with Beenie Man at the studio frequented by the legend. “He just listened to the track and jumped on it right away,” says Shaka with a noticeable deep admiration in his voice. “Within minutes, he listened, he formulated the verses he was going to sing…without even writing a word on a piece of paper. You can see why he’s the king.”
Platinum Camp Records CEO Daddy BIGG$ is set to quarterback American movement on the track, which was produced by I.W.A.A.D. Music, LLC and co-produced by Shaka himself. Truly an international effort, in addition to Atlanta (the home of Platinum Camp Records), the track was made in part in Jamaica, New York and Israel. “It shows collaboration and unity in music,” Shaka says, “the power of music to lift the spirit of the people. We thought the studio may have been bombed out in Israel. Bombing was right next to it.”

Shaka continues, “We are still waiting for some of the restrictions to get all the way lifted to film the video. We want to show men and women bubbling together. That vibe is very sexy, after a lot men and women got no lovin’ tonight, during the shutdown. In Jamaica, we missed the crowded, sweaty intensity of the dancehall. Ready to bring that back full force, that balance of male and female energy, people playfully teasing each other.…It’s already being played on the island.”