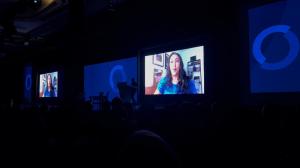 “We were specifically honored for our work during the pandemic in a program called Heroes for Humanity,” said Megha Desai, President of The Desai Foundation.

The agile way we had developed our programming allowed us to make slight adjustments to serve our communities with what they were struggling with—health and livelihood.”
— Megha Desai, President, The Desai Foundation

BOSTON, MA, UNITED STATES, September 22, 2022 /EINPresswire.com/ — AN EXPLORATION OF “A NEW WAVE OF FEMALE LEADERSHIP” was on the agenda of the plenary session on day one of the Clinton Global Initiative (CGI) 2022 this week in New York City, and was attended by a long list of notables including Matt Damon, Bono, Ashley Judd, Nobel Prize winner Malala Yousafzai, and Queen Rania of Jordan. Also in attendance were President Bill Clinton, Secretary Hillary Clinton, and Chelsea Clinton.

CGI, which brings together established and emerging leaders for opportunities to collaboratively tackle pressing issues, brought to the podium such luminaries as Hillary Clinton and Melinda French Gates to explore this new wave of female leadership they see as poised to fight rising threats against human rights, women’s rights, and the prosperity that results when those rights are not codified and strengthened.

The work of three nonprofits and their leadership were recognized during this plenary session and one of them was The Desai Foundation, a Boston-based nonprofit with a sister entity in Navsari, Gujarat, India.

Tucked between Clinton and Gates, a video recording of Megha Desai, President of The Desai Foundation, played to the audience in a darkened room. Desai, a first generation Indian American, spoke of The Desai Foundation’s work over the previous 25 years “empowering women and children through community programming to elevate health and livelihood.”

“We were specifically honored for our work during the pandemic in a program called Heroes for Humanity,” she said in the video. “The Desai Foundation has always been about bringing health, vocational training programs, and menstrual equity initiatives to the most rural parts of the eight states we serve.”

The Desai Foundation has been quietly at work over more than two decades building alliances and trust in the communities they serve. With 30+ programs focused on elevating health and livelihood, they were quickly ready and able to put an action plan in place when the second wave of COVID-19 hit India in the spring of 2021. In one short year, they provided direct services to nearly three million rural Indians.

“During times of urgency there can be a tendency to lean into the issue of the moment. While most NGOs during the pandemic struggled to keep their doors open, we couldn’t expand fast enough. The agile way we had developed our programming allowed us to make slight adjustments to serve our communities with what they were struggling with—health and livelihood—which are the services we provide. And because of our innovative way to deploy these services, we were invited into more and more communities,” she says as she considers their success.

The Desai Foundation’s commitment to action is an expansion of their Heroes for Humanity Initiative, which is already flexing to meet recovery needs.

“We aim to serve another two million folks this year,” says Desai, “and by ‘taking action together,’ and with the support of our supporters we will do just that.”

About the Clinton Global Initiative (CGI)
The Clinton Global Initiative (CGI) convenes global and emerging leaders to create and implement solutions to the world’s most pressing challenges. CGI works with partners to drive action through its unique model. Rather than directly implementing projects, CGI facilitates action by helping members connect, collaborate, and develop Commitments to Action—new, specific, and measurable plans that address global challenges. Through CGI, the community has made more than 3,700 Commitments to Action that have made a difference in the lives of more than 435 million people in more than 180 countries.