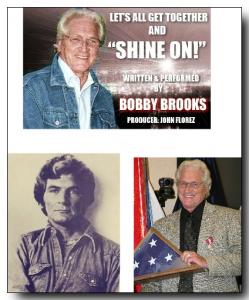 A prolific singer-songwriter, Bobby’s 200th tune, “Shine On”, is a song written to bring light and positivity to a world so desperately in need of it.

SCOTTSDALE, ARIZONA, UNITED STATES, July 6, 2022 /EINPresswire.com/ — Bobby Brooks is a highly decorated disabled Vietnam War veteran and a retired Officer for the US Army Space and Missile Defense Command (USASMDC). He is well-known for his Alabama tribute song, “Huntsville Lights.”

He was born and raised in a multi-talented musical family near the town of Sparta, in Alleghany County, nestled in the Blue Ridge Mountains in Northwest, North Carolina.

A prolific singer-songwriter, Bobby’s 200th tune, “Shine On”, is a cute, retro, catch-phrase song written to bring light and positivity to a world so desperately in need of it.

“Shine On” has just been released digitally and is available at on-line music stores. Digital sales royalties for “Shine On” will be donated to the Wounded Warrior Project.

“Shine On” was produced by multi-gold record producer, John Florez, who is best known for producing “Rock The Boat”, the #1 world-wide hit that is credited with helping start the disco trend back in the 1970’s.

Bobby eventually wishes to affiliate with an independent music publisher so that he can expand his catalogue and write for a myriad of other music artists.

Bobby Brooks currently performs at Veterans benefits and donates concerts for families in need and private bookings as well. He has refined his talents, managed to survive through extremely hard times, and is still marching forward victorious through it. Bobby declares “It was all blessings from God”. He always has a smile, kind words and is ready to lend a helping hand.