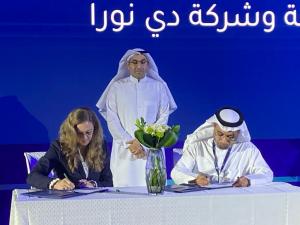 We feel honored to broaden our partnership with SWCC and as their governor, Abdullah Al-Abdul-Karim recently stated, share the vision of making the most out of every drop”
— Dr. Mirka Wilderer, CEO of De Nora Water Technologies

MILAN, ITALY, May 31, 2022 /EINPresswire.com/ — In line with Saudi Vision 2030, De Nora Water Technologies and Saline Water Conversion Corporation (SWCC) expand their partnership with the signing of a memorandum of understanding (MOU) on brine mining and water electrolysis research. The MOU also includes innovations to the vacuum-based Capital Controls® Chlorine Dioxide Generators used in desalination pre-treatment and disinfection, which were approved by the Desalination Technology Research Institute (DTRI) earlier this year.

“We feel honored to broaden our partnership with SWCC and as their governor, Abdullah Al-Abdul-Karim recently stated, share the vision of making the most out of every drop,” said Dr. Mirka Wilderer, CEO of De Nora Water Technologies. “Not only are they the largest desalination corporation in the world, but they’re also one of the country’s largest electricity providers. With our areas of expertise so closely intertwined, our synergy has the potential to make a positive impact on the future of our planet. We are excited to take our longstanding relationship to the next level and explore solutions together that will solve critical environmental issues being faced around the world.”

The De Nora business model is multifaceted – aligning a complete portfolio of electrode and water technologies. Its proprietary DSA® electrodes and coatings are used in electrochemical applications worldwide, including in the production of green hydrogen. The continuous improvements with De Nora catalytic coatings allow organizations like SWCC to optimize the overall economics of hydrogen production via water electrolysis when seawater is used. Similar projects are currently underway in Saudi Arabia, where the joint venture of De Nora and thyssenkrupp Nucera was recently awarded a contract for one of the world’s largest water electrolysis plants that will produce 650 tons per day of green hydrogen along the shores of the Red Sea.

Wilderer adds, “Water electrolysis will play a key role in helping countries achieve net zero goals in the energy transition, and as fresh water sources become more scarce, seawater desalination and brine mining will play a critical role. We look forward to discovering how to make the most out of this resource, down to the hidden elements within the seawater itself.”

Currently using chlorine dioxide generators for disinfection, SWCC expands its use of these systems in the MOU to purification plants for pre-treatment of iron and manganese – common elements associated with “hard” water sources. Earlier this year, De Nora’s technology demonstrated a yield ratio of 95 to 97 percent during the DTRI approval process, solidifying its efficiency in treating the region’s most challenging contamination concerns.

A formal signing ceremony took place on Monday, May 30 in Jeddah, Kingdom of Saudi Arabia at the International Desalination Association Specialty Conference on Innovation Driven Desalination. Representatives from De Nora and SWCC were in attendance.

About De Nora
De Nora is an Italian multinational company specializing in electrochemistry, leading player in sustainable technologies and the emerging green hydrogen industry. Globally, De Nora is the world’s largest supplier of electrodes for major industrial electrochemical processes and a leading supplier of water filtration and disinfection technologies (for the industrial, municipal, marine sectors and swimming pools). Leveraging its consolidated electrochemical know-how and proven production capability, the company has developed and qualified a portfolio of electrodes and components to produce hydrogen through the electrolysis of water, which is crucial for the energy transition. In this sector, the company also has a JV with ThyssenKrupp, called TK Nucera, of which it holds a 34% stake. Founded in 1923, De Nora reported total revenues of €616m and EBITDA of €127m in 2021. The Company’s growth process developed both organically, thanks to continuous innovation, and by external lines, through major acquisitions in the USA, the UK, Japan, and Italy. The Group’s intellectual property portfolio currently includes over 250 patent families with more than 3,000 territorial extensions. The company is controlled by the De Nora family (64%), and Snam holds a minority stake of approximately 36%. More than 1,700 people provide the energy and expertise to fuel this exciting journey. Denora.com