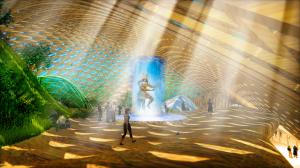 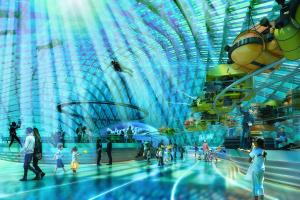 The 2nd pod of the future Bay Ecotarium will contain an immersive theater, “Blue” restaurant and bar and deep ocean submersibles

San Francisco, CA- When George Jacob arrived to lead the now Smithsonian Affiliated Aquarium of the Bay on PIER 39 in San Francisco 5 years ago as its first President & CEO, his assessment of the ageing facility, prompted the genesis of a vision to transform it into a $260 million environmental edifice unlike any other, dedicated to Climate Change and Ocean Conservation- the Bay Ecotarium.

Unlike conventional science museum exhibits that often tend to deliver an overdose of data, graphs and technical analysis, the Ecotarium is an evocative platform that is programmed for a three-part trigger. First, to appreciate the wondrous beauty of our Blue Marble we call home in all its magical biodiversity and delicate and complex balance of the web of life. Second, to feel the anguish of a planet in pain that remained silent to the Anthropocene and then began exploding with ominous fury that is existential for human-kind. Third, to remember that our collective future relies on us taking decisive action- be it with programs, policy or personal lifestyle choices driven by sustainability and 360 circular economies. The soul of the Ecotarium is a 2 million gallon saltwater aquarium with 300 species and 30,000 animals that offers a lens to life – silent and unseen – below the depths of the ocean.
Indigenous environmental stewardship in mitigating Climate Change is integral to conservation efforts-locally and globally. With the office of the President Joe Biden naming representative Deb Haaland of New Mexico as the Interior Secretary, creating history while honoring heritage, a new era for the environment awaits in the United States. Native American Laguna Pueblo lineage makes her the first Native American to ever hold a Cabinet Secretary level position.

A co-sponsor of the Green New Deal, Deb Haaland brings a unique indigenous perspective to environmental leadership as she prepares to be at the helm of natural resources and land. With 574 federally recognized tribes holding sovereign treaties with the United States, their numbers are upwards of 5 million with about 78 percent living outside reservations.

Indigenous Peoples of the world comprise 5 percent of the world’s population and live on 22 percent of the land that is home to over 75 percent of the global biodiversity. According to the 2018 IPCC Report (Inter-government Panel on Climate Change), the native symbiosis with environment is synonymous with climate solutions. The Special UN IPCC Report on climate change, desertification, land degradation, sustainable land management, food security, and greenhouse gas fluxes in terrestrial ecosystems, draws on indigenous perspectives and practices. Everything from the rotation of crops, plant palette of native species, conservation and forest management practices, water distribution, hunting and fishing levels of consumption, recycling, burning cycles, terrain and geographical nuances, seasonal adaptations, curation of flora and fauna, recognizing vectors of pollination and cross-pollination, movement of livestock, will be at play in regulated measures seeking 360-degree circular economies both at the micro and macro levels. From Treaty obligations to Earth Justice, the list of complex issues is long and multi-generational, braided with emotional and trust issues of marginalization, racism, and the specter of ‘climate refugees’ from the tiny pacific island of Kiribati to the mighty burning greens of the Amazon. With over 18,500 indigenous peoples, tribal traditions in the San Francisco Bay Area and languages have survived through sheer tenacity of elders and youth.

Being in the mecca of Tech, IT will play a major role in the guest experiences of the Bay Ecotarium. Augmented and Virtual reality will immerse visitors into scenarios of real climate change crisis examples and provide an elevated sense of urgency for immediate action. Machine learning, emotional intelligence, google driven visual mapping and real-time user engagement will be utilized to further these experiences and create inspiring messaging that translates into real action. The VR platform component of the building can transcend geo-political boundaries and engage upwards of 2 billion people, despite the physical footprint projections of 2 million visitors per year.

The Bay Ecotarium is a movement- BE the movement!