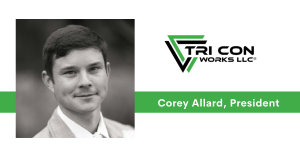 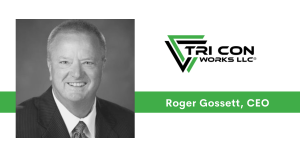 We are looking forward to having Corey lead the growth and development of the company.”
— Roger Gossett, CEO of Tri Con Holdings

Gossett praised Allard for his commitment to expanding his knowledge of the landfill gas industry and mastering “various components of the construction process” since joining Tri Con Works in 2017.

“His engineering background has given him a technically sound and well-rounded skill set uniquely positioning him for this leadership role. We are looking forward to having Corey lead the growth and development of the company.” -Roger Gossett, CEO of Tri Con Holdings

Allard graduated from Texas Tech University in 2012 with a Bachelor of Science degree in Civil Engineering. He started his career as an engineer in the landfill gas industry, then transitioned to a career at Tri Con Works five years later.

For the last five years, Allard has fulfilled various tasks at the company, including estimating, procurement, project management, revenue/profit forecasting, construction planning and execution, and profit/loss management. He has also worked hard to develop strong client relationships with other industry professionals.

Allard is known among his colleagues and coworkers as an exceptional leader and communicator who easily adapts to new situations, develops innovative solutions to problems, and exceeds client expectations.

As the new president of Tri Con Works, Allard stands on the shoulders of giants. The Houston-headquartered company is a leading environmental contractor specializing in constructing and maintaining methane gas recovery systems for solid waste landfills.

Tri Con Works was founded in 1998. Since then, the company has built hundreds of customized, turnkey projects for private and public landfill operators.

With over 24 years of experience, Tri Con Works has one of the industry’s most exemplary regulatory compliance records. The business is known for its expertise, attention to detail, and efficient, non-disruptive construction processes.

Tri Con Works strives to provide the highest quality services in the industry at competitive rates. They’re proud to be known for exceeding customers’ needs and expectations and plan to maintain that reputation.

Corey Allard is taking over as the leader of an impressive business with national reach. Fortunately, he will not be working alone to achieve the company’s mission and goals.

Allard works alongside several other prominent industry professionals with over 150 years of combined experience.

Those who want to learn more about Tri Con Works or utilize their services can visit the company’s website: http://triconworks.com/Tri_Con_Home.html