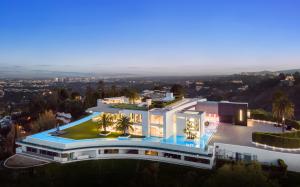 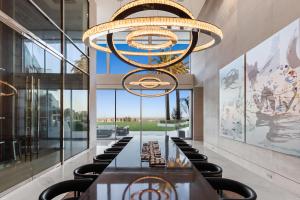 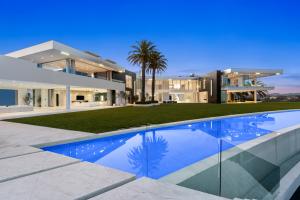 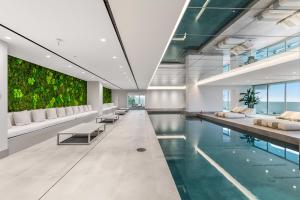 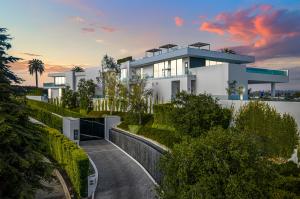 ‘The One’ in Bel Air, California has sold in cooperation with Aaron Kirman of Compass and Branden and Rayni Williams of The Beverly Hills Estates

We’re routinely asked to do the remarkable, which is to sell one of a kind properties in the most time efficient manner possible. Our platform does that with precision.”
— Chad Roffers, Concierge Auctions President

After a competitive field of bidder activity, the auction closed on March 3rd for a final price over $141 million, more than double the highest U.S. sale at auction and nearly 50% higher than the world record. In cooperation with multibillion-dollar producing international real estate agents Aaron Kirman of Aaron Kirman Group at Compass and Branden and Rayni Williams of Williams & Williams at The Beverly Hills Estates, the sale marks Concierge Auctions’ fifth consecutive World Record for the highest price ever achieved for a residence at auction.

“After years in the making, the sale of ‘The One’ ultimately concluded with six weeks of intense global marketing exposure leading to a qualified field of bidders to solidify the new owner of this once-in-a-lifetime property,” said Kirman. “We look forward to seeing what this property will become and working with Concierge Auctions on our next property together.”

“With an exceedingly small group of potential buyers for a property of this caliber at the onslaught of the auction, the ultimate goal was to run a thoughtful sale process that would maximize value, reach, and speed,” said Lawrence Perkins or SierraConstellation, Crestlloyd’s Manager. “By hiring both expert international brokers and the leading luxury real estate auction marketplace in the world, the teams were able to collaborate, execute, and achieve an outcome that has previously taken years to accomplish—all in just six weeks.”

An estate for the ages, The One is a work of art set on 3.8 acres with breathtaking, 360-degree panoramic views of the Pacific Ocean, downtown Los Angeles, and the San Gabriel Mountains. The property is spread over a jaw-dropping 105,000-square-feet with every imaginable mega-resort style amenity, including five vast pools, a private nightclub, full-service beauty salon, wellness spa, 10,000-square-foot sky deck, 400-foot private outdoor running track, private Dolby Digital theater, and much more.

“We’re routinely asked to do the remarkable, which is to sell one of a kind properties in the most time efficient manner possible. Our platform does that with precision,” stated Concierge Auctions President, Chad Roffers. “We delivered what the seller and buyer wanted—a time-certain and efficient sale. In a world of limited inventory and multiple offers, our platform is the most efficient way to connect buyers and sellers.”

“The sale of The One was witnessing history in the making. This has been a three-year labor of love, with ups and downs but that’s why this sale means even more to us,” stated Rayni Williams. “The One redefined mansions in L.A. and became an icon through headlines around the globe. Representing both the buyer and seller on this sale was a career highlight we will never forget. With the dedication of my co-listers and team, we were able to find the perfect buyer for The One.”

“I’m very grateful to have been a part of this journey. The sale of The One is one of the highest sales so far in 2022, and we were honored to be involved on both sides,” added Branden Williams.

As part of Concierge Auctions’ Key for Key® giving program in partnership with Giveback Homes, the closing will result in a new home built for a family in need.

Agents will be compensated according to the terms and conditions of the Listing Agreement. See Auction Terms and Conditions for full details. For more information, including property details, exclusive virtual tour, diligence documents, and more, visit ConciergeAuctions.com or call +1.212.202.2940.

About Concierge Auctions
About Concierge Auctions Concierge Auctions is the world’s largest luxury real estate auction marketplace, with a state-of-the-art digital marketing, property preview, and bidding platform. The firm matches sellers of one-of-a-kind homes with some of the most capable property connoisseurs on the planet. Sellers gain unmatched reach, speed, and certainty. Buyers receive curated opportunities. Agents earn their commission in 30 days. In November 2021, Concierge Auctions was acquired by Sotheby’s, the world’s premier destination for fine art and luxury goods, and Realogy Holdings Corp., the largest full-service residential real estate services company in the United States, holding a joint 80 percent ownership stake. Concierge Auctions continues to operate independently, partnering with real estate agents affiliated with many of the industry’s leading brokerages to host luxury auctions for clients. Since Concierge Auctions’ inception in 2008, it has generated billions of dollars in sales, broken world records for the highest-priced homes ever sold at auction and conducted auctions in 46 U.S. states and 32 countries. The firm owns one of the most comprehensive and intelligent databases of high-net-worth real estate buyers and sellers in the industry, and it has committed to build more than 300 homes through its Key For Key® giving program in partnership with Giveback Homes™, which guarantees that for every property the company sells, a new home is funded for a family in need. For more information, visit ConciergeAuctions.com.

About Aaron Kirman
Aaron Kirman is President of the International Estates Division at Compass and founder, CEO and techpreneur of the eponymously named Aaron Kirman Group, which includes a team of over 100. With $9.2 billion in lifetime sales, Kirman represents the finest estates across the globe and is sought after by the most discerning clients, including titans of industry, celebrities, royal families, major lending institutions and foreign investors. A prominent figure in the luxury real estate market for the past 20 years, Kirman is known for selling homes priced at the hundred million dollars range and has received international acclaim for record-setting sales across Southern California, including selling the Danny Thomas Estate and the Eddie Goetz Estate. Kirman was ranked among the top five luxury real estate agents in the U.S. by the Wall Street Journal. The star of TV’s newest hit real estate show, Listing Impossible on CNBC, Kirman is regularly featured in publications like The New York Times, BBC, Forbes, CNN, The Los Angeles Times, Variety, the London Times, E! Entertainment and CBS. For more details, visit www.aaronkirman.com or on Instagram @aaronkirman and @akg.re.

About Compass
Compass is a leading national real estate technology company, providing tools and services to help real estate agents grow their businesses and better serve their clients. As one of the largest groups of small business owners in the country, real estate agents utilize the end-to-end Compass platform to improve their productivity and help them manage their business more effectively. Compass currently powers over 15,000 real estate agents across 100+ U.S. cities, who were responsible for over $91 billion in real estate transactions in 2019. For more information on how Compass powers one of the largest groups of business owners in the country, please visit www.Compass.com.

About Rayni Williams
Specializing in high-end real estate, Rayni Romito Williams has established a remarkable record with more than $8.7 billion total with her partner in career sales. Her in-depth knowledge of market trends and luxury inventory, paired with her energetic and confident disposition has made her one of the nation’s top-producing female agents. Growing up in a family of developers, Rayni is no stranger to the world of real estate. Rayni possesses a unique skillset of being able to creatively market and understand the financial aspect of each transaction, which she acquired through her previous careers in journalism and the lending business. In 2005, Rayni returned to her real estate roots when she joined a Beverly Hills-based brokerage and immediately proved herself to be an honest and hard-working real estate professional. Shortly thereafter, Rayni met then colleague Branden Williams and began partnering on some of the most notable deals in LA. Growing quickly, Rayni and Branden developed an impressive roster of clientele, which now includes Jeremy Renner, Jennifer Lopez, Angelina Jolie, Bruce Makowsky, Max Martin to name a few. More than a decade later, Rayni and Branden are still setting records in the LA real estate market. With more than $1 billion in sales in Trousdale alone and notable deals in Beverly Hills, the Bird Streets and Los Feliz, the power couple continues to be nationally recognized as a top-producing team. Rayni has been nationally and locally recognized for her impressive work, and has earned notable accolades including, The Wall Street Journal’s Top-Producing Agents, Variety’s Real Estate Elite, The Hollywood Reporter’s Top Real Estate Agents and Los Angeles Business Journal’s 500 influential people in Los Angeles. Additionally, she has provided real estate expert commentary for various top-tier national news outlets including Wall Street Journal, LA Times, Forbes, CNN, Business Insider, Bloomberg TV, Fox Business, The Hollywood Reporter, Variety and more.

About Branden Williams
Born and raised in Beverly Hills, Branden holds a deep understanding of the local real estate market and brings a “hometown” advantage to the Williams & Williams Estates Group brand. Branden’s devotion to out-of-the-box creative marketing strategies, unwavering loyalty and relentless energy has resulted in a number of national and local accolades, including The Wall Street Journal’s Top-Producing Agents, Variety’s Real Estate Elite, and The Hollywood Reporter’s Top Real Estate Agents. Additionally, Branden has provided real estate expert commentary for various top-tier national news outlets including Wall Street Journal, Bloomberg, Fox Business, ABC News, People, CNN, CBS Money and more. While working at his first brokerage firm, he met his future wife Rayni Romito and the two launched Williams & Williams Estates Group in 2006. Together, Branden and Rayni are the go-to power couple representing clients such as Markus Persson, Dr. Dre, Jennifer Lopez and Bruce Willis, along with some of the world’s most notable listings including 924 Bel Air Rd sold for $94 million and a private Malibu estate sold for $110 million. Branden was a born salesman. The early experience of helping his father sell sheepskin and cowhide rugs at the age of 7 on the side of Fairfax Avenue instilled in him the business acumen and entrepreneurial aptitude that paved way to his success. He continued working in the customer service and entertainment industry through college at the Fashion Institute of Technology in Los Angeles and later parlayed his passion for fashion and style into architecture, design and ultimately luxury real estate.

About The Beverly Hills Estates
The Beverly Hills Estates has reached the pinnacle of the global real estate market by specializing in architecturally significant and one-of-a-kind properties here in LA. The firm’s motto ‘We don’t follow trends, we set them’ has not only led to record-breaking sales, but also build their clients’ property portfolios. The Beverly Hills Estates is the leading real estate firm in Los Angeles. Recognized as L.A.’s highest-performing real estate team based on their impressive sales record of over $780 million in 2019, with a career totaling over $8.7 billion in sales, the husband-and-wife real estate duo specialize in historic properties in Malibu, Trousdale, Beverly Hills, Los Feliz, and beyond. Their passion to preserve and protect Los Angeles’ most iconic homes is mirrored in their representation of properties by world-renowned architects such as Paul R. Williams and Frank Lloyd Wright. In 2019, they broke the record of the highest priced Frank Lloyd Wright property ever sold by closing The Ennis House for $18M. Branden and Rayni bring an invaluable mix of passion & professionalism to every project and represent some of the most expensive listings in the world. www.thebeverlyhillsestates.com.