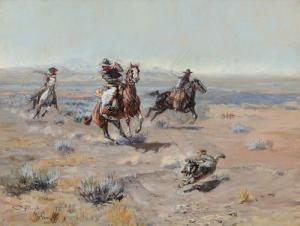 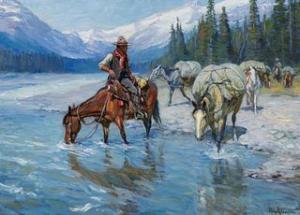 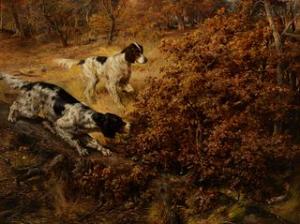 NEW YORK, NY, UNITED STATES, August 10, 2021 /EINPresswire.com/ — The Coeur d’Alene Art Auction brought a strong total of over $ 17.5 million during this year’s sale. The highlight of the 2021 sale was auction mainstay Charles M. Russell’s Roping a Wolf, 1904, which sold for over $ 1.7 million – the highest total for the influential Western artist in over seven years, and the tenth-highest total all-time. The largest single-auction event in the classical Western and American Art field saw over 30 lots eclipse the $ 100,000 price point, realizing a sales rate of over 94%.

With a round of spirited bidding that ignited the crowd, a world record was also set for Edmund H. Osthaus when Two Hunting Dogs, 1891, sold for $ 242,000, against a presale estimate of $ 40,000 – 60,000. The bidding spanned the course of several minutes, as phone and internet bidders volleyed for greatness.

Herman W. Hansen’s Attack on the Stagecoach set a world record with a price of $ 157,300 versus a presale estimate of $ 80,000 – 120,000. Long considered to be his finest work, the high-action oil painting came from a prominent collection in Jackson, Wyoming.

In addition to multiple world records, the Coeur d’Alene Art Auction set high marks with its online bidding partner Bidsquare for largest auction total with over $ 4.1 million in online sales. Also setting a record for an individual item sold at auction was Oscar Berninghaus’ The Domain of Their Ancestors, 1925, earning $847,000 which more than doubled Bidsquare’s previous record of $ 381,000 for an item sold online.

Notes for the Editor
High resolution photos available on request.

About Bidsquare
Bidsquare is a curated marketplace platform and auction technology service provider. Bidsquare.com is where collectors go to discover and bid on rare and authentic fine art, antiques and design from leading auction houses and dealers. Bidsquare is the destination for individuals and collectors seeking exceptional, one-of-a-kind pieces, with new, unique property added every day. Visit http://www.bidsquare.com to view all auctions.