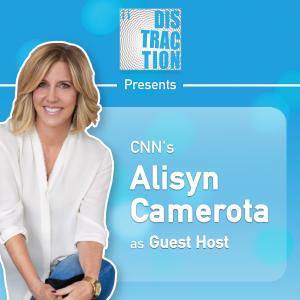 The move signals a shift of focus for the podcast beyond ADHD and related wellness and lifestyle topics, while still addressing the needs of a vibrant ADHD community that the podcast has serviced over the last six years.

“We are broadening the scope of Distraction. The pandemic has significantly altered the mental health landscape and each guest host will offer unique perspectives and guests,” Guertin explained.

“We are thrilled that Alisyn, mother of three teenagers, will inaugurate the podcast’s new direction and will focus largely on parenting during her time with us,” Guertin said.

Camerota, an Emmy Award winning journalist, brings deep human-interest experience to Distraction, including her coverage of the impact of Hurricane Maria on the people of Puerto Rico. Her interviews with Parkland student survivors in the hours after the massacre, as well as with the NRA, became integral parts of the national conversation.

Two of her early Distraction conversations will be with ABC correspondent Gloria Riviera and Real Housewives of Orange County star Heather Dubrow. They talk about everything from what it takes to raise resilient kids, mom guilt, and universal childcare; to how growing up in the 1980s influenced their parenting styles; to the challenges of having a family in the spotlight.

“I’m super excited to be hosting this series of Distraction. I’m hoping our listeners find our guests, through their own experiences, interesting, informative but most of all helpful as we muddle through parenting in these most challenging times,” Camerota said.

Camerota’s stint as guest host extends from August 20 to September 30.

Sounds Great!, the producers of Distraction, will be announcing forthcoming guest hosts in the coming weeks.