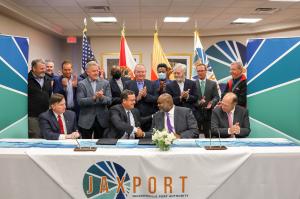 JACKSONVILLE, FLORIDA, UNITED STATES, February 14, 2022 /EINPresswire.com/ — The JAXPORT Board of Directors today unanimously approved a 20-year, $60 million agreement between Ceres Terminals and JAXPORT for the lease and modernization of the TraPac Jacksonville container terminal in Jacksonville, Florida.

In a separate transaction, Ceres will purchase the terminal’s previous leaseholder, terminal operator TraPac Jacksonville, LLC from Mitsui O.S.K Lines, Ltd. (MOL), subject to closing conditions. Details of the private transaction, including purchase price, have not been disclosed.

“We are excited about our long-term commitment to JAXPORT and the local community. Our significant investment in Dames Point Terminal provides an excellent gateway for South Atlantic-based distribution centers, well into the future,” said Craig Mygatt, Ceres Terminals CEO.

The agreement includes a $45 million lease with JAXPORT. Ceres will also make $15 million in terminal upgrades, including investments in cargo handling equipment and systems.

A leading international terminal operator, Ceres has 60 years of experience with operations at many of North America’s largest ports. The company is experienced in terminal development, operations and stevedoring for a variety of cargo types and trade lanes.

“An investment of this magnitude speaks volumes about the opportunity that exists in Jacksonville,” said JAXPORT Board Chair Wendy Hamilton. “We are grateful to Ceres for their continued investment in our community and look forward to growing this important partnership in the future.”

“The ongoing supply chain disruption underscores the significance of this agreement and the importance of the capabilities offered by the TraPac Jacksonville facility,” said JAXPORT CEO Eric Green. “When we put together JAXPORT’s Strategic Master Plan, our focus was growing cargo volumes and the private sector jobs they support. This agreement is a major step forward in the evolution of that plan. We thank MOL for their partnership over the years and look forward to growing the economic impact this facility has on our community under its new ownership with Ceres.”

An existing JAXPORT tenant, Ceres has also operated the JAXPORT intermodal yard (ICTF) at Dames Point, adjacent to the TraPac terminal, since it opened in 2016.

Operations and ocean carrier services will remain the same, ensuring a seamless transition for customers.

Ceres is a leader among marine terminal operators and stevedores in North America. Operating in many of North America’s major marine ports, the Company provides terminal management as well as services for all types of cargo, including container, bulk, breakbulk, automotive, project, military, cruise, intermodal facilities, RO/RO operations, and M&R services. Ceres is wholly owned by a fund managed by Macquarie Asset Management.

JAXPORT is Florida’s largest container port and one of the nation’s top vehicle-handling ports. Located in the heart of the Southeast U.S., Jacksonville offers same-day access to 98-million US consumers via 40 daily trains and more than 100 trucking firms. Cargo activity through Jacksonville’s port supports 138,000 jobs and $31 billion in annual economic output for the region and state.