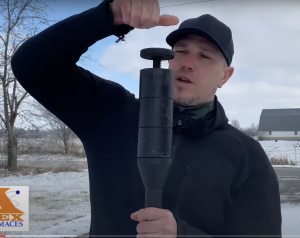 We (Adex) have in production right now, a line of products
made to Wildman’s specifications that will be available by year’s
end. I couldn’t be more excited”
— Don Giafardino

“Wildman Athletica’s club training programming is top notch and Adex products work perfectly with it. It’s like they are made for each other. Mark has 200K+ subscribers on YouTube that we can currently produce equipment for and are able to grow along with,” says the 58 year old Giafardino.

“We have been working together for a year and it’s time to get serious. We (Adex) have in production right now, a line of equipment made to Wildman’s specifications that will be available by year’s end. I couldn’t be more excited.”

Mark Wildman is known for training Hollywood celebrities and pro athletes, instructing fitness courses, and online training. He has an extensive fitness background which began on his mother’s equestrian therapy farm for people suffering from cerebral palsy, autism, and degenerative diseases. Mark’s teachings are very informative and entertaining.

Adex Clubs debuted in 2014, when Don began marketing an adjustable weight exercise club prototype he designed and tested. After some success, a mace and a mid-length club called the Arc™️, both utilizing the same adjustable proprietary weight system, debuted. The line then grew to include a choice of handle thicknesses, fractional weights, and an additional weight kit for those willing to test their mettle.