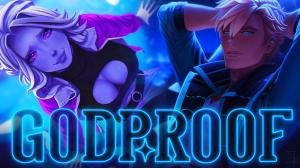 EAST YORK, ON, CANADA, July 31, 2021 /EINPresswire.com/ — Godproof is about pushing back the darkness, to discover the unforeseen truths of your very existence! Play as Raiden, a young swordsman determined to return home, accompanied by the bubbly sorceress Eve. Slay cosmic horrors, and make some very interesting friends along the way!

The goal of the kickstarter is to help pay for the—current and future—licences and equipment all used to make this game a reality. Nigel has been developing this game using RPG Maker MV on his 2013 Mac Book Pro he has been using since high school. There are still certain programs he requires, however, he does not have access to them because the current hardware is unable to use the latest applicable operating systems. Nigel needs to upgrade his equipment so he can deliver the best content possible!

Nigel is asking for $5000 CAD for Godproof’s kickstarter campaign. He has reached 40% of the goal so far, but the campaign has only 30 days left to reach 100%. Contributors have the opportunity to purchase a limited reward that allows you to be in the game, make your contribution soon!

“What does “Godproof” mean?” Godproof is NOT intended to be anti-religion. The name is what best describes the main character Raiden, and his natural immunity to the powers of omnipotent beings, hence god-proof. Nigel wanted to design a game that truly empowered the player, without being overkill. That’s when he thought, “What if they were immune solely to gods?” and ran with that.

“What inspired Godproof?” Nigel took inspiration from all the fun franchises he love, such as Devil May Cry, Stranger Things, Elder Scrolls, Dark Souls, and many more. He loves DMC to bits, but not everyone can play fast action-based games like those. Nigel made compromise using RMMV engine’s Final Fantasy-style turn based battle system; using a multitude of plugins to make the combat more fast-paced and interesting, without overcomplicating it.