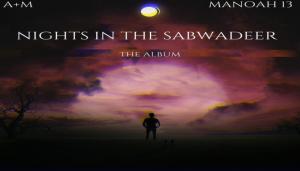 [Sab-wa-deer- An unknown place far away.]

Music is my place, it allows me peace and comfort, without it, I feel lost. With it, I have everything”
— A+M

POCONO SUMMIT, PENNSYLVANIA, UNITED STATES, May 28, 2022 /EINPresswire.com/ — The producer/songwriter and artist duo blend sounds of pop, rock, and r&b on their first project together. The melodic guitar sounds take from their main inspirations of Nirvana, Seal, Shania Twain, Usher, Brandy, and Linkin Park. The Title Nights In The Sabwadeer came up when A+M suggested naming the project after the final single, “The Sabwadeer.” In A+M and Manoah 13 world, Sabwadeer means “An unknown place far away. “It’s not made up, or fake, it’s just a feeling that you get when you’re really invested in something.”

After the two talked it over some, they had a title. A+M is the oldest of the 5 siblings, while Manoah 13 is the youngest. Music has run in their family for generations. With their roots being Harlem-based, it’s in their genes. Their father who is also a producer and businessman in the music industry got each of them involved with music at a young age. A+M practiced piano when he was a kid before getting into producing and mixing. Musically his alter ego is Larmont, which lends more to club-shaking electronic beats and sounds. He’s grown a recent following with songs such as, “Why try,” “Flaws & All,”, and “Love You 4 Me .”

On the other half of the duo is Manoah 13 who in December 2021, started teaching himself guitar. He did this by practicing songs on youtube and tunes he liked. The songwriting process for him is simple, first comes the melody of the song, which is usually on the guitar, and then the lyrics that fit what he’s feeling and thinking at the time. This is Manoah 13’s first official project to be released to the public. While still currently in high school, he has been posting short songs and snippets on Soundcloud under the same persona for the last year and a half. In his words, he says, “this is a great start and we put all we had in it. My brother and I have always loved music and the earliest memories I can think of is looking up at my siblings banging on the dinner table singing along to Beyonce and Rihanna after dinner.”

A+M says that “Music is peace. Music comforts me. Music motivates me to want more every day. Music allows me to find peace in the midst of the storm. Music has had a profound effect on me more than any medicine can ever have. ”
Each of the tracks holds a nostalgic feeling to the artists and hope to take the listeners far away.
The Ep can now be streamed on all platforms.

All songs written, recorded, and produced By A+M and Manoah 13 under ℗ 2022 Wiggins Media Group Worldwide